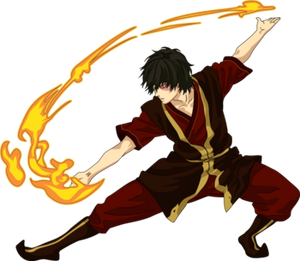 "I used to think this scar marked me - the mark of the banished prince, cursed to chase the Avatar forever. But lately, I've realized I'm free to determine my own destiny, even if I'll never be free of my mark."

Zuko is an anti-villain-turned-anti-hero, and eventually became the true deuteragonist in Avatar The Last Airbender. He was banished by his father, Firelord Ozai and sought to capture or kill Avatar Aang to redeem himself. He gradually became good and eventually joined Aang's companions. He became fire lord after he defeated his younger sister Azula (Grey DeLisle) on the day that would have marked the coronation of his younger sister as Fire Lord. He is also one of the supporting characters in The Legend of Korra.

He is voiced by Dante Basco who also plays Rufio from Hook and Jake Long from American Dragon.

Zuko is a fire bending master, born as a prince in the Fire Nation Royal Family, who held the throne to the Fire Nation from 100 AG to 167 AG. His story often paralleled that of Avatar Aang. Initially Team Avatar's primary enemy, Zuko's life revolved around trying to capture the long-lost Avatar to end his banishment and regain his honor as Crown Prince of the Fire Nation.

Zuko is easily recognized by the distinctive scar on the left side of his face. It was given to him by his father, Fire Lord Ozai, shortly before his banishment as a result of an incident in which he unintentionally disrespected his father by speaking out of turn and refusing to duel him.

With support from his paternal uncle, General Iroh, and after much internal struggle and turmoil, Zuko rejected Ozai and his model of the Fire Nation. He instead joined the Avatar's group to become Aang's friend and firebending teacher and was determined to end the war and restore both his and the Fire Nation's honor. While Aang defeated Ozai, Zuko, with the help of Katara, defeated his prodigious younger sister Princess Azula and took his place as Fire Lord, declaring the end of the Hundred Year War and the start of an era of love and peace.

At the beginning of his reign, Zuko had to overcome great difficulties and solve several crises, especially those caused by the Harmony Restoration Movement. Nevertheless, he succeeded in maintaining peace and eventually became one of the founders of the United Republic of Nations. Zuko retired from his position as Fire Lord in 167 AG and became an ambassador of peace, relinquishing the throne to his daughter.

At the beginning of the series, Zuko is introduced as the main antagonist and who is relentlessly and obsessively searching for Aang in hopes of reclaiming his honor, and throughout the season is hot on the Avatar's trail, at times both helped and hindered by Iroh. Zuko competes in his quest against Zhao, an ambitious Fire Nation admiral. In The Blue Spirit, Zuko rescues Aang from Zhao's fortress to prevent Zhao from accomplishing his goal. Zhao arranges an assassination plot against Zuko, but Zuko escapes with Iroh's help. During the invasion of the Northern Water Tribe, Zuko captures Aang, but both are nearly killed in a snowstorm. Aang then saves Zuko from dying of hypothermia. Zuko encounters Zhao and attacks in an act of revenge, but the Ocean Spirit abducts Zhao before the fight is concluded. Ozai thereafter assigns Zuko's younger sister Azula to seize Zuko and Iroh due to Zuko's failure to capture Aang and Iroh's betrayal during the siege.

Pursued by Azula, sixteen-year-old Zuko and Iroh travel the Earth Kingdom as impoverished refugees. After briefly quarreling with and parting ways with Iroh, Zuko reunites with his uncle against Azula. When Azula wounds Iroh with a bolt of lightning, Zuko nurses Iroh back to health and Iroh teaches Zuko to redirect lightning. Zuko and Iroh arrive at the walled city of Ba Sing Se, meeting Jet in the process. Iroh and Zuko find employment at a tea shop in the slums. Jet accuses Zuko and Iroh of being firebenders, but is arrested after he attacks Zuko. Zuko reluctantly adapts to his new life until he learns of Aang's presence in Ba Sing Se and attempts to steal Appa. However, Iroh convinces Zuko to abandon his quest and let Appa go. Azula infiltrates the city to stage a coup and arranges a trap for Zuko and Iroh. Captured and placed in Crystal Catacombs, Zuko encounters Katara, and both are rescued by Aang. Although Zuko and Katara share a brief moment of compassion, Azula convinces Zuko to betray Iroh and the Avatar. In the resulting fight, Aang is wounded and Iroh is arrested.

Returning to his country a hero, Zuko learns that Azula lied and told Fire Lord Ozai that Zuko killed the Avatar. Zuko suspects that Aang survived and hires an assassin to ensure Aang's death to cover up Azula's lie. Iroh is imprisoned, but manages to lead Zuko to learn that his maternal great-grandfather was Avatar Roku, Aang's previous incarnation. Prior to the Day of Black Sun, Zuko inadvertently catalyzes his father's plan to destroy the Earth Kingdom with Sozin's Comet. Zuko becomes guilty over betraying Iroh and contributing to a second genocide, leading him to confront Ozai during the eclipse. Zuko openly berates his father and states his intention to help Aang. Although they initially reject him, Aang and his companions grow to accept Zuko as a member of the group after he proves his allegiance by helping defeat the assassin and journeys with Aang to meet the last dragons.

After helping Sokka free Suki and Hakoda from the Boiling Rock prison, Zuko amends with Katara by locating her mother's killer. When Aang disappears shortly before Sozin's Comet, Zuko leads the effort to track down the Avatar which leads him to Iroh. Zuko tearfully apologizes to Iroh, who forgives him for his mistakes. Iroh suggests that Zuko become the next Fire Lord, citing Zuko's "unquestionable honor". Arriving at the Fire Nation capital with Katara, Zuko duels Azula for the throne. When Azula faces defeat she forces Zuko to place himself in the path of a lighting bolt aimed at Katara, which leaves him wounded and immobile. Katara defeats Azula and heals Zuko. After Aang wins the war, Zuko becomes the new Fire Lord, promising world order and harmony with the aid of the Avatar.

Zuko is a very skilled firebender who controls his fire quite well, though not at the same level as his gifted sister, Azula, who can create both blue fire and lightning.

When challenged to Agni Kai by Admiral Zhao, Zuko was able to beat him fairly easily, thanks to all his training. Zuko's fire was fueled by rage and anger, which he had plenty of, but when he redeemed himself and joined Team Avatar, his rage lowered and his firebending weakened. It was later when he realized that Firebending was not fueled by anger, but determination, where his fire bending grew once again due to his determination to take his spot at the throne and help Aang defeat his father.

Zuko attempted to learn lightening bending from Iroh after his and Iroh's lives were threatened by Azula. He failed to master it at every attempt, however, as he had not faced his "inner turmoil", as a lightening bender must know precisely what they truly want, and Zuko had always been borderline between his father's expectations and his own free will. When he finally seemed to decide on free will, Zuko took a shocking turn back into his fathers expectations when he was given the ultimate chance to kill the avatar.

In the end, Zuko never learned how to bend Lightening. Instead, Iroh taught him how to absorb and redirect lightning, something neither Azula nor Ozai were knowledgable of. He later employed this technique against his father (when he left the Nation) and Azula (to protect Katara). In the latter engagement, Zuko redirected the blast in an improper stance, as he had jumped into the lightning's path, and so failed to redirect it completely and resulted in serious injury. Though he seems to have overcome his inner turmoil, he does not create lightning for the remainder of the series.

In addition to his firebending, Zuko is highly skilled in unarmed combat, able to break apart oncoming spears with his hands and legs, and disarm, subdue or defeat opponents. He is also equally masterful with his dual dao blades, the latter skill he picked up after being trained by the sword master Piandao. He would use these two skills as his primary tactics whenever he was in his Blue Spirit disguise, unable to firebend, or when he needed to fight but also needed to conceal his firebending. He was able to defeat multiple foes using only his swords. He also dueled evenly with Jet and his dual hook swords until the fight was broken up by the Dai Li and Jet was arrested. Zuko defeated several Earth Kingdom soldiers with his Dao swords and minimum effort, only resorting to firebending when faced with a powerful earthbender; even then he was able to hold off the earthbender's attacks for several moments with only his blades. His skill was such that his father, Fire Lord Ozai, opted not to face him during an eclipse, when neither of them could firebend. Zuko is very physically capable, able to almost nonchalantly launch a person with a single hand and smash through iron shackles with a single kick. He is also quite fast and agile, able to perform great acrobatic feats, such as running across walls, doing mid-air twirls, scaling vertical faces with great efficiency and climbing speed, and jumping large distances to avoid enemy attacks with noticeable agility and free-running skills. Zuko is skilled at infiltration and stealth; able to sneak into heavily-defended fortresses and conceal himself effectively for long periods of time. All of these skills would serve him while he was disguised as the Blue Spirit. Zuko was also a skilled tracker, able to track the airborne Avatar all across the world, something that his friends later acknowledged in hopes of finding Aang when he disappeared.

While not as naturally adept at strategy and academics as his sister, Zuko is quite intelligent. Throughout the series, he demonstrated himself to be a skilled strategist, able to exploit any situation to his advantage. Zuko used his ship's damages as a smokescreen to conceal his movements from Zhao. He is also able to form alliances with people with special skills, such as June, and use them to his advantage. However, Zuko tended to have a hot-headed nature that caused him to never fully think his actions through. For example, he was able to his exploit advantages in the Northern Water Tribe, and get into the Spirit Oasis to capture Aang, but he did not figure a way back out ahead of time which caused him to almost freeze to death. Zuko began to think things out more toward the end of the series, and he started to plan things out and think ahead to solve problems more often. When he and Aang needed to get in a specific room in the Sun Warrior ruins, Zuko was able to outsmart the Celestial Calendar, as it would only allow the room to open during a solstice. Zuko is also a gifted tsungi horn player, although it is clear that it is not his favorite instrument.

Retrieved from "https://characters.fandom.com/wiki/Zuko?oldid=124323"
Community content is available under CC-BY-SA unless otherwise noted.