Zorak is a fictional character who first appeared in the Hanna-Barbera cartoon Space Ghost. Zorak appeared as a 7 foot tall green mantis and is a foe of the show's titular superhero.

Zorak originally appeared in the animated series Space Ghost and Dino Boy in 1966. He was one of Space Ghost's most feared enemies and appeared in 6 episodes, starting with "The Challenge." Zorak was voiced by Don Messick, who spoke in a buzzy monotone meant to evoke his insect-like features.

Cartoon Network revived the Space Ghost characters in 1994 for Space Ghost Coast to Coast, a talk show where the main characters' roles were re-invented. On the new show, Space Ghost had released Zorak from prison, but forced Zorak to act as his leader of the band 'The Original Way Outs' from a "prison pod" with an installed keyboard. Zorak's villainous mentality remained, and he would heckle Space Ghost in most episodes. In rare instances, the two would have moments of compromise, such as when Space Ghost believes he is dying. On the Cartoon Network shows, Zorak was voiced by animator C. Martin Croker. Croker originally imitated the monotone of Messick, but over the years took Zorak's voice in his own direction.

Zorak is usually grumpy and sarcastic sometimes with a sick sense of humor. He relishes insulting Space Ghost whenever possible and winding Space Ghost up so much that he blows Zorak up with his Power Bands (a running gag in the show). Zorak simply regenerates from this each time. Zorak had a small nephew at one point called Raymond. Zorak devoured him and then laughed about it. He has a gun, a Matter Intensifier, which he keeps hidden in his keyboard and sometimes gets out to give Space Ghost a zap for all the times he has blown him up. The Space Ghost Coast to Coast episode "Cahill" has a good spar between the two. The episode also suggested that Zorak has a surname, Roberts, or Space Ghost could just have been nicknaming him that. He is a fan of Metallica although when the band came on the show, he told them to "Bite me!" — one of his favorite phrases (though he's revealed to be a big fan of the Ramones). Others include: "I am the Lone Locust of the Apocalypse, think of me when you look to the night sky" and "I'm Egyptian!" He gets on best with Moltar but has low tolerance for Space Ghost, other characters and guests. He has flirted with a few of the female guests but it was mostly to annoy Space Ghost. He gains satisfaction from using Brak in The Brak Show. Brak thinks of Zorak as a friend; Zorak likes to think he has no friends.

Zorak was initially referred to by Space Ghost as a locust; it was not until the seventh episode, "Punch", when guest Dian Parkinson mistook him for a grasshopper that he mentioned that he is actually a mantis. He explained that he did not notice Space Ghost was calling him a locust until Space Ghost brought it up. Zorak also refers to himself as "The Lone Locust of the Apocalypse," but does not explain the meaning of this title, although it could be an allusion to his destructive tendencies. It is notable that Zorak has an apparent rivalry with fellow Space Ghost villain Lokar, who is quite obviously a humanoid locust; Lokar is portrayed as elitist and more cultured than the vulgar and crude Zorak, whom Lokar insultingly refers to as an arachnid.

Footage from the original series for Zorak is taken from his entire crew, meaning Zorak's gloves and vest have a tendency to change color for no reason. He also has his own unique sound (which he once tried to sue Space Ghost for stealing) that he makes whenever he blinks.

Although Zorak has proven elusive concerning any parents or relatives, the episode "Hungry" introduced his likable, harmless nephew, Raymond. A miniature version of Zorak, Raymond aspires to one day be "Uh... Locust of 'pocalypse", which Space Ghost finds immensely cute. Zorak eventually devours his nephew, resulting in a brief memorial slideshow, including a photo of Moltar and Raymond in a bathtub in the middle of a busy street. Though seemingly dead, Raymond has made two appearances since his introductory episode. The first is the episode "Speck" which actually features only Raymond's voice, calling out that he's still alive, while Zorak talks loudly to mask his nephew's pleas for help (all of which goes right over Space Ghost's head). Raymond's third and final appearance was a post-credits ending to the "Zorak" episode in which he reappears to Zorak as an angel trying to earn his wings. Raymond was voiced by C. Martin Croker, just like his uncle Zorak.

In the episode "Girlie Show", Zorak admits to being Episcopalian. This claim is repeated in "Woody Allen's Fall Project", which featured a live staging of the scene in "Girlie Show" by staff members of Space Ghost Coast to Coast. In that episode Zorak was shown in live-action.

Zorak also appeared in The Brak Show. On the show Brak considered Zorak to be his best friend, even though Zorak would often insult him and beat him up. Thundercleese would constantly blow up Zorak for ruining his yard. Zorak would often beat or blow up Brak's other friend Clarence. In some episodes he is in love with Brak's Mom. He was on twenty-six of the twenty-eight episodes.

Zorak is the Leader of the Zorathians and sworn enemy of Space Ghost and his sidekicks Jan and Jayce. Zorak can essentially live forever using a hive mind society. If he is killed, his mind and essence would be transferred to another Zorathian who then transforms into exact duplicate of Zorak's original form. The Zorathians follow their leader Lord Zorak and travel from planet to planet to kill the inhabitants and breed in their corpses. While most of the Zorathians are olive green and have two arms, Zorak is green with purple markings and has four arms (two hands and two pincers).

Zorak appears in the following issues: 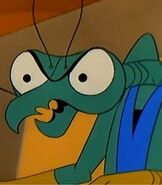 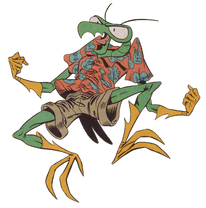 Add a photo to this gallery
Retrieved from "https://characters.fandom.com/wiki/Zorak?oldid=77985"
Community content is available under CC-BY-SA unless otherwise noted.