Zeta the Sorceress is the main villain in the television show Shimmer and Shine. She is the evil rival of Princess Samira. She debuted in the second season and plays a main role in most episodes from then on.

Zeta is Princess Samira's rival, who will do anything to become the most powerful person in Zahramay Falls. She is not very skilled at being evil. Her plans are always thwarted by the genies. Zeta hates being called a genie and is quick to correct people who mistake her for one. She also steals Shimmer and Shine's gems. She has a pet dragon named Nazboo who tries to help Zeta in her schemes, but usually fails and gets berated.

Zeta has green eyes and purple hair. As a sorceress, she wears green shoes and a dark blue/purple dress. As a genie, she wears blue glasses and a teal outfit. 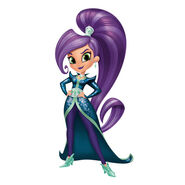 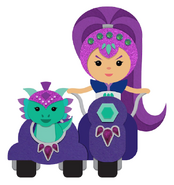 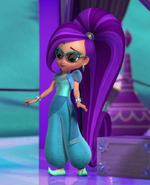 Retrieved from "https://characters.fandom.com/wiki/Zeta_the_Sorceress_(Shimmer_and_Shine)?oldid=113489"
Community content is available under CC-BY-SA unless otherwise noted.