Yumi Ogura is a villain from Another anime series. She is the younger sister of Atsushi Ogura. She is voiced by Iori Nomizu in the original Japanese dub and Tiffany Grant in the American English dub.

Yumi was present for Kouichi's first day of class in"Rough Sketch". She stood off to the side, talking to Junta Nakao (Houston Hayes) and Takako Sugiura (Emily Neves), rather than welcoming her new classmate like her friend Aya Ayano (Margaret McDonald). Yumi was also present for Shouji Kubodera's suicide, but wasn't among the group to leave right away, she's seen on her knees in shock on the situation before pulling herself together and exiting the classroom.

In "Body Paint", she and Aya met Kouichi (Gregory Ayres) and Naoya (Christopher Patton) in front of the old school building, looking for Mr. Chibiki for some acting advice. Later, when Aya and Yumi part ways, Yumi continued home and found the front of her house had been crushed by an excavator. Her older brother, Atsushi Ogura, was found dead in his room. At roughly the same time, the Ayano's car was hit by a falling rock and went over the side of the mountain, killing Aya and her family. Both losses devastated Yumi.

In "Glass Eye", she went on the class trip and sat with Izumi and the other girls at dinner. She was present when Izumi blamed the calamity on Mei (Monica Rial), but like Takako, did not actually take part in the shouting match which followed.

In "Makeup", Yumi heard the tape played by her countermeasures partner, Takako. She was shocked and enraged at the news. Taking a knife/dagger from her room, she set out to kill Mei once and for all, claiming her actions were to avenge her older brother's death. Driven by revenge, the normally quiet Yumi led the hunt for both Mei and Kouichi, forcing Kouichi to hit her, knocking her back into Kyoko making both girls fall, something Kouichi apologized for as he ran away in fear.

Furious and enraged, Yumi and the others continued pursuing the two into one of the inn's rooms. Yumi ordered her fellow students to step aside before kicking the door in and following both Mei and Kouichi onto a slippery window ledge. While attempting to kill Mei with the knife/dagger, Yumi leaned too far as she swung her knife/dagger and lost her balance, falling to the ground and breaking her neck like a twig. She died instantly on impact, her body bent at an unnatural angle.

Yumi seems to have a shy personality as she doesn't talk much at all. She is concerned about class 3's countermeasures. Also, Yumi is a calm, gentle, quiet and innocent girl. She often blushes. Yumi was good friends with Aya Ayano. In episode 11, she goes insane and lose her sanity when hearing that Mei is the one who bought the death curse. 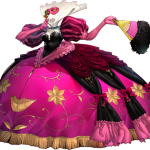