Yami Yugi (real name Atem) also known in Japanese and Manga as Dark Yugi is the titular protagonist and anti-hero of Yu-Gi-Oh!. He is Yugi Muto's partner and best friend and Seto Kaiba's arch-rival.

When he was alive, Yami Yugi was a pharaon who inherits his father's Millennium Puzzle after this one passes away, Atem has three Egyptian God Cards to defeat Thief King Bakura and Zorc the Dark One, he was sealed in the Millennium Puzzle while protecting his people from Zorc and his undead monsters.

When Yugi Muto, a young boy completes the Millennium Puzzle, he awakens his split personality named Atem who has adopted the name Yami Yugi, as Yami Yugi, Atem torments the bullies who hurt Yugi Muto and his friends who are beaten up by the bullies, and he gives the bullies an penalty game and outsmarts Yami Bakura who has attempted to hurt Yugi and his loved ones. Yami Yugi has a signature card named Dark Magician who has a female counterpart named Dark Magician Girl who inherits the souls of all Dark Magicians and Magician of Black Chaos who sleep in the graveyards. In the movie he defeated Anubis, the antagonist of the movie who guards the Pyramid of Light that lures the Gods into a banishment trap previously after Seto Kaiba receives it from Maximillion Pegasus. In 3D movie, he helped Jaden and Yusei rescue Stardust Dragon from Paradox and his malefic monsters to prevent the deaths of Pegasus and Solomon Muto from occuring in order to change the future. In Yu-Gi-Oh! The Dark Side of Dimensions, a virtual copy version of him appears, only to be defeated by Seto Kaiba, the original Atem appears to rescue Yugi Muto by taking possession of him with an upgraded Mahad to defeat Diva and his demonic Cubic monsters. He then smiles at Yugi Muto before returning to the Underworld as Atem to be challenged by Seto Kaiba, he was seen in the end smiling. In Yu-Gi-Oh! GX, he takes control of Yugi Muto to summon Slifer the Sky Dragon from his Graveyard with Code Change that he takes it from Jaden by switching from Spellcaster-type to Divine-Beast Type he was seen smiling with Jaden and Yugi. 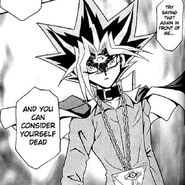