Yadamon is the main heroine from the titular TV anime series, manga and Super Famicom video game. She is a young and novice witch who flies by turning her hair into butterfly wings, rides a magical vacuum and has a talking manatee named Manatee(Manity Aunt) for a mentor who watches her and lives deep down in the caves of Creature Island.

Yadamon is over 5 years old in human years. Since this mischievous witch and her mischief passed, she is a fallen witch (Her flying and jumping around the fairy forest destroyed the forest on a night with a full moon that broke with a broom), She is exiled from the Witch's Forest by the Queen of the witch's forest who is her mother and she came to the Le Blanc family of the human world. Even though she got up from her sleep and waking-up is the worst, even though she is working, have sometimes been thrown towards and by Taimon from the Fairy Forest and the Le Blanc family and the Bucci brothers , but William is the only one has not been thrown and tossed . First person words she would use are "I" or "Me". Initially, the magic she used was initially only able to fly in the sky with a kite (with an upright type vacuum cleaner in the human world) only during the night of the full moon and when Taimon stops time, but afterwards after some special training would flying can be only done by one person during the process. She would grow little by little with the power of a magic stones (brooches) so that she can use another magic spells will be used. Once she fell down from the roof, she hit her head and got the ability to predict. She has green hair. She uses magic to make her hair result in a swallowtail-type form. Although it can be hidden in the specific energy of children, she is actually the owner of abnormal physical ability, agility, speed, jumping power over adults and a unconsiderable tough blow even if she gets damaged, it is a easy toughness she has. As mischievous and selfish as she would be, in the second word that is "That's, Yadamon" is wasteful, but her roots are pure and not even a lie. Her favorite food is donuts and ice cream made by Maria. As she was the last child in the Witch's Forest, no new witches has been born after her.

Yadamon in the opening theme 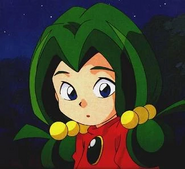 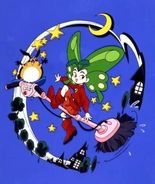 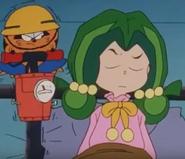 Yadamon in pajamas
Add a photo to this gallery
Retrieved from "https://characters.fandom.com/wiki/Yadamon?oldid=109666"
Community content is available under CC-BY-SA unless otherwise noted.