Wilma Flintstone is a fictional character in the television animated series The Flintstones. Wilma is the red-headed wife of caveman Fred Flintstone, daughter of Pearl Slaghoople, and mother of Pebbles Flintstone. Her best friends are her next door neighbors, Betty and Barney Rubble.

Wilma's personality is based on that of Alice Kramden, wife of Ralph Kramden on the 1950s television series The Honeymooners. Much like Alice, Wilma plays the strong-willed, level-headed person in her marriage, often criticizing Fred for pursuing his various ill-fated schemes. Wilma is often be the one to bail out Fred when one of his schemes land him in trouble. 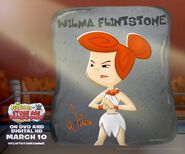