William Afton is the overarching antagonist of the Five Nights at Freddy's franchise. He was a man who dressed up as one of the mascots at Fredbear’s Fanily Diner (Spring Bonnie) and used his kid-friendly facade to lure children into the Safe Room, where there were no security cameras. It was confirmed that William was the man who built the animatronics for Freddy Fazbear's Pizza.

After an accident where he set off the spring-locks in the Spring Bonnie costume, he becomes The Springtrap and is the main antagonist of Five Nights at Freddy's 3 and secondary antagonist of Freddy's Fazbear's Pizzeria Simulator. Afton is also the primary antagonist in the FNAF novel series.

In 1983, William and his best friend, Henry Emily, decide to open up their first restaurant together called Fredbear’s Family Diner.

One day, in Fredbear's Family Diner, as Fredbear was serving cake to the children, Henry’s daughter, Emily, was crying outside because she was locked out of the restaurant by three other children. As she cried, William drove over in a purple car and murdered the girl, it was unknown why he murdered her but it was possibly due to a fight he and Henry had, but this is uncertain.

Later, that same year, Fazbear Entertainment opens Freddy Fazbear's Pizza, introducing Freddy Fazbear, Bonnie, Chica, and Foxy as the new mascots. These new animatronics were added alongside the original Fredbear and Spring Bonnie characters, which were made as springlock suits that doubled as both animatronics and costumes that a person could wear. William returned to the restaurant and wore a Spring Bonnie suit to lure five children, one by one, into the establishment's Safe Room before murdering them. Afterwards The Puppet, possessed by William's first victim, stuffed the corpses of the five children into the Freddy, Bonnie, Chica, Foxy, and Golden Freddy animatronics, allowing their spirits to possess them. 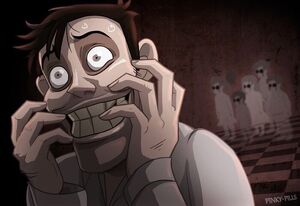 William met his demise more than once. His mortal life ended when he set off the locks in the Spring Bonnie costume and the mechanical parts crushed William to death. His spirit possessed the suit he died in, leaving him a walking machine with his former body rotting inside it. "The Springtrap" Was burned to death at the end of Five Night's at Freddy's 6. William eventually ends up in Hell, tormented by the spirits he killed long ago. Killing him over and over again, causing the same pain he caused them decades earlier.

However, William eventually escapes this hell, as he finds his way back to life in a way by becoming a digital virus in the new game that is being developed, in this game, he takes the form of the Spring Bonnie suit that he used many years ago. In the new VR game, he uses it to recruit new members to become his protege and eventually success him. He succeeds and possess Vanny.

Retrieved from "https://characters.fandom.com/wiki/William_Afton?oldid=161935"
Community content is available under CC-BY-SA unless otherwise noted.