The White Rabbit is a fictional character in Lewis Carroll's book Alice's Adventures in Wonderland. He appears at the very beginning of the book, in chapter one, wearing a waistcoat, and muttering "Oh dear! Oh dear! I shall be too late!" Alice follows him down the rabbit hole into Wonderland. Alice encounters him again when he mistakes her for his housemaid Mary Ann and she becomes trapped in his house after growing too large. The Rabbit shows up again in the last few chapters, as a herald-like servant of the King and Queen of Hearts.

In his article "Alice on the Stage," Carroll wrote "And the White Rabbit, what of him? Was he framed on the "Alice" lines, or meant as a contrast? As a contrast, distinctly. For her 'youth,' 'audacity,' 'vigour,' and 'swift directness of purpose,' read 'elderly,' 'timid,' 'feeble,' and 'nervously shilly-shallying,' and you will get something of what I meant him to be. I think the White Rabbit should wear spectacles. I'm sure his voice should quaver, and his knees quiver, and his whole air suggest a total inability to say 'Boo' to a goose!"

A military trench-digging machine developed by the British Royal Navy at the beginning of World War II was originally known as White Rabbit No. 6, but the name was changed to Cultivator No. 6 to conceal its identity. 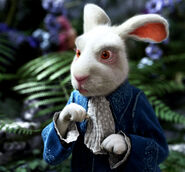