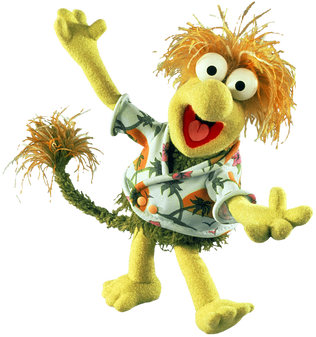 Wembley Fraggle is one of the five main Fraggle characters in Fraggle Rock. His skin is yellowish green. He has a long nose and big movable eyes, and a big tuft of yellow hair on his head. He usually wears a banana tree shirt.

Wembley is the youngest Fraggle of the group. He is often cheerful and energetic, but also very insecure. He usually agrees with everybody at the same time, because he hates to argue. Wembley never seems to make up his mind: he even has trouble deciding which shirt to wear, although he owns only two, which are identical.

Wembley shares a room with his best friend Gobo Fraggle. He loves to play the bongos and he works as a siren for the Fraggle Rock Volunteer Fire Department.

His first name was named after Wembley Stadium.[1] In the context of the show, his name is derived from the Fragglish word "to wemble," meaning "going to and from between two things without being able to make up your mind." In the language of the ancient Fraggles, "Wembley" means "No scratch nose in public."

Michael Frith stated that part of Wembley's character originated with a line from The Great Muppet Caper. In the film, Nicky Holiday tells his sister "no" when she expresses her desire to lock her diamond necklace away in a safe. When he is called on this, he states: "Yes! I meant yes. Why would I say no when I meant yes?" Frith thought the statement would make for an interesting character.[2]

Wembley was the first Fraggle known to encounter The Terrible Tunnel and survive it. Wembley also helped Gobo get the courage to face the beast of Blue Rock.

He is allergic to laundry lint, cave cotton, rock dust (as revealed in The Voice Inside), and bonkleberries (as revealed in Sidebottom Blues). In "Capture the Moon" he invents the wheel, but can't get it to work. It keeps rolling away. His favorite meal is peach and pepper pottage as revealed in "Gone, But Not Forgotten." He is also the referee for the rock hockey game between Gobo's Gorgbusters and Rumple's Roustabouts in "Playing Till it Hurts".

The Wembley puppet is unique because it has the ability to roll its eyes.

Wembley appeared in A Muppet Family Christmas with the other four Fraggles. He was also seen during "The Holly and the Ivy" number when the Fraggles see where the songs are coming from.

Retrieved from "https://characters.fandom.com/wiki/Wembley_Fraggle?oldid=50187"
Community content is available under CC-BY-SA unless otherwise noted.