Flatulence
Super strength
Wario is an antagonist in the Mario series. He is rivals with Mario and Luigi and is brothers with Waluigi. He makes MicroGames as a profession, as seen in the WarioWare games. He is also enemies with Captain Syrup, a pirate who fights him in Super Wario Land 3: Wario Land.

Wario is a playable character and main antagonist in Super Smash Bros. Brawl. In SSBB he is able to control his farts, ride his WarioBike, and turn into WarioMan, his super form. He seems to be working for Master Hand, just like Bowser and Ganondorf. He attacks Ness and Lucas, and later attacks Lucas and Pokémon Trainer. He helps all the other smashers defeat Tabuu. 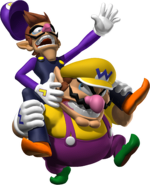 Wario and his brother Waluigi 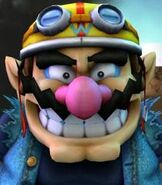 Wario as he appears in Super Smash Bros. Brawl 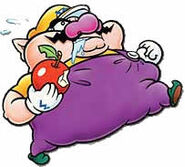 Wario in his WarioWare outfit
Add a photo to this gallery
Retrieved from "https://characters.fandom.com/wiki/Wario?oldid=167618"
Community content is available under CC-BY-SA unless otherwise noted.