Walter is a Muppet character first introduced in the 2011 film, The Muppets.

Walter lives with his brother Gary, and both of them are huge Muppet fans. He is sweet, slightly naive, and lacking self-confidence. In the film, Walter and Gary set out to reunite the Muppets to help save Muppet Studios.

Entertainment Weekly described the character in a November 2010 article, stating:

"Meet the newest member of the Muppet repertory company: Walter, a sweet, slightly naive twenty-something Everypuppet who, in the movie, is the best friends and roommate of [Jason] Segel's character, Gary. Both Gary and Walter are die-hard Muppet fans. "Walter is the kind of guy who faints when he sees Kermit," [James] Bobin says. Of course, Walter's Muppet fandom is complicated by the fact that he is a Muppet himself. "Walter has a bit of a self-confidence issue because he's the only person like him that he's seen aside from the Muppets," Segel explains. "His dream is to meet the Muppets and be around people who are like him." When Gary and Walter learn that the Muppet Theater is in danger of being torn down, they set out to save it by reuniting Kermit, Piggy and the entire troupe to stage an old-fashioned extravaganza.[1]"

Disney's official description of Walter from October 12, 2011 reveals that he and Gary are brothers:

"With his Kermit t-shirt and watch, Walter is a devoted fan of the Muppets. The lifelong resident of Smalltown, USA, dreams of meeting his heroes one day, and feels that — just maybe — he belongs with them. So when brother Gary and his girlfriend Mary plan a trip to Los Angeles, Walter joins them with hopes of realizing his dream once and for all.

Walter finds himself in the wrong place at the wrong time — or is it the right time? — when he overhears evil oil baron Tex Richman discussing a plot to destroy Muppet Studios. With the help of Gary and Mary, it’s Walter who sets the plan in motion to reunite the Muppets and save the studio. His pure-hearted enthusiasm for all things Muppets just might save more than the studio, too."

Walter was named after the first puppet Jason Segel ever owned.[2] In an interview at the World Premiere, Walter claims he was swimming laps at the Beverly Hills Hilton when a talent scout discovered him for the role (he was the only person he could find 18 inches tall).

The script only specified that Walter had the look of “an old dishrag” and wore a blue suit. Puppet Heap Workshop president Paul Andrejco drew 14 possible Walters, and later, 25 different combinations of color and fabric texture.[3]

"We based Walter’s design on the same one they used for Kermit—he’s basically a hand puppet with a more advanced mouth. That design gives the puppeteer’s hand maximum freedom of movement, so with the smallest amount of finger change, he or she can create a huge range of expressions. With a few flicks of his left finger, Peter can make Walter look incredibly different all the time and because the camera is close enough in, you swear you can hear this puppet thinking and that conveys the emotion of the movie.[4]"

Six puppeteers were considered for the role of Walter during an audition process.[3] 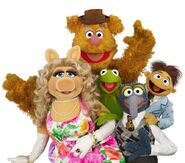 Walter and the gang

Walter in Jim Henson's 'The Muppets'.

Walter being shocked by an electric fence.

Retrieved from "https://characters.fandom.com/wiki/Walter_(Muppet)?oldid=120390"
Community content is available under CC-BY-SA unless otherwise noted.