Transformation
The Violator is the eldest sibling of five demonic brothers known as The Phlebiac Brothers and was created by Malebolgia along with the rest of them to serve his purposes, including training Hellspawn. He is also the arch-nemesis of the anti-hero Spawn.

The Clown is the alter ego and disguise of the Violator, he uses this form so that he may walk among human beings. This body however is shown in the form of a short obese clown with blue face paint the top of which shows an "M" for Malebolgia. Whenever Violator possesses a body they also show this trademark face paint.

Hellspawn Past and Present

The Violator was sent to Earth in order to train the newest Hellspawn, Al Simmons currently known as Spawn, however Violator went on a killing spree in an attempt to get the mafia on Spawn, this worked but the deaths caused crime to be lowered through the whole city, later during his battle with Spawn, Malebolgia grew angry at him for his actions and locked him in his Clown form.

During his time in this form he revealed his past to 3 kids telling them a twisted version of his battle with the Medieval Spawn. He kidnapped his wife and during the ensuing battle Violator was decapitated but his mission was considered a success since he had driven away the Hellspawn's only love. As a reward Malebolgia revived his body. Soon after finishing his story he found out that Spawn had been blamed for his murders, angered now that there was no use of it he went to show Tony Twist and the mafia to show them who really committed the murders.

After finding out Spawn had been blamed for the murders of the city's mafia leaders he decide to show them the truth but without his demon form he knew it would be impossible so he made a deal with Spawn to borrow some of his power and bring it back after he got what he needed. Once he began murdering mafia members Tony Twist retaliated and sent out hitmen, however Violator had the aid of an ex-soldier with a grudge against the Mafia. The whole time however his brothers grew angry and embarrassed with Violator's actions and decided to put a stop to him, after Violator had attacked the mafia his brothers found and fought him only to have him reveal that thanks to Spawn he regained his ability to change back to his demon form and defeated his brothers then betrayed his help and killed him escaping into the night as the mafia lost track of him, returning only to give Spawn back his power.... and to plan his revenge.

After getting back his powers Violator set a trap for Spawn and used a lackey named Rat to trick Spawn. When Rat found Spawn he knew his real name, angered Spawn followed him, however just before he reached him Violator killed Rat by ripping his heart out. When Spawn found him Violator dragged Spawn down to the sewers below where a fierce battle ensued. During the fight a pipe ruptured and sent both of them to different parts of the sewer, was then that The Freak pulled the violator out of the water and ran of. Then violator came up with a new plan and sought the help of Jason Wynn. he used his powers to get to Jason and get to Spawn's family. soon he started stalking Cyan and framed Spawn by taking his form and letting Wanda Fitzgerald catch him in the act of kidnapping her. The plan however backfire horribly as Spawn found the Violator and destroyed him while he was still in his Clown form.

Although Spawn had destroyed him in his human form Cogliostro revealed to Spawn that the only way to truly kill a demon was to cut off it's head in its true demonic form. It was then that Mammon began using Violator to torment Cyan during Spawn's battle with Urizen. Then during Spawn's return to hell to gain control of The Eighth Sphere of Hell that he faced off and defeated the Violator yet again. This however was not the last that would be seen of him.....

After Spawn had stopped The Kingdom by using the demons Ab and Zab to create a portal to Hell, Mammon ordered Violator to return via the portal to wreak havoc on Spawn's life. Once there he found that Spawn had forced Jason Wynn to go insane and so he appeared to him as a ghostly apparition and helped him pull himself together eventually helping him get his job back in the NSA. However after Jason returned to the top he control over Jason's psyche and took advantage at a time when Wynn was about to fall to his death, he forced him to fall and possessed his body using it as his new vessel.

After taking control of Jason he transformed his body bloating him and growing fans and put his blue face paint on Wynn's face. The Violator then began to "mark" the citizens of the city and turning them all into blue faced clowns just like Jason Wynn. He possessed them and forced them to tear apart the city and commit crimes and vandalism but when Spawn went to stop him, Violator fought and beat him nearly to death but instead of killing him he left Spawn in the alleys of New York in his regular Al Simmons persona entrapping him within the Dead-Zone using him as an attraction for the circus his brothers had turned the all of New York into... ""The Phlebiac Brothers' Pandemonium Circus." When he woke up however he was somehow outside of the Dead-Zone and attempted to defeat the Violator only to be beaten again, knowing he couldn't defeat the Violator Spawn turned to fighting the clowns and protecting the citizens of the city, but when the people turned against him his grenades went off and left Spawn unconscious and suddenly Violators attack stopped. Violator supposedly left Jason Wynn's body and Violator was now free to wander the Earth with no strings attached.

With his spirit now free to do as it wished Violator reappeared in a new taller, skinnier body. The Violator had saved the life of a man named Barney Saunders who had been trapped in a garbage chute who would have been eaten alive by rats and roaches had it not been for Violator's presence. Barney Saunders was the lover of a married woman named Wilma Barbera. Trying to escape discovery by Wilma Barbera's husband, Barney Saunders jumped down the garbage chute only to be trapped there a couple of days before the bright light event (Spawn's destruction and recreation of the world). Violator saving him however was no act of charity as he possessed Barney's body and utilized it as his own. Now after gaining his new body he released the inhibitions of the residents of an apartment complex forcing to commit horrific murders and acts of crime and violence. This allowed him to create a portal to hell for his brothers to enter Earth through. During the murders Sam Burke and Twitch Williams encountered Violator as they investigated the scene. When Spawn learned of thess events via Sam and Twitch he fought Violator only to be defeated. Just as Violator was about to bring his brothers through the portal Barney's lover Wilma Barbera appeared, his love for her allowed him to gain control again. Not wanting to let the demons through he closed the portal himself by going through it and closing it but not before taking Wilma with since he was angry that she had left him in the chute. After going through the portal it closed and left Violator, Wilma, and Barney stranded in Hell.

Violator/Clown displays some differences in his powers depending which form he takes. Violator possesses superior strength, shape shifting abilities, unarmed combat abilities, and claws. He has also been shown to breath fire and in some cases change his size and grow. Since he is a demon certain Earthly limitations do not apply to him and he can do things like breath both air and water and does not need to eat to survive. Has the ability to jam guns.

Clown also possesses superior strength and shape shifting abilities, however unlike Violator, he doesn't have claws and has limited combat skills due to his small size, this changed however when he took possession of Jason Wynn and later Barney Saunders. In addition, Clown has telepathy, can teleport, and can perform feats of necromancy. He has also been known to be able to posses multiple human bodies at one time and can force to do horrible things. He also has the ability to release people of their inhibitions so that they can commit horrific deeds. He also has the ability to make guns jam.

Violator/Clown, appeared in the Spawn animated series as one of the main villians taunting spawn at every turn. However Violator only made his appearence as his true from for one fight in the first season, and again for a short time in the second one.

Violator is the eldest of the five Phlebiac Brothers. He also was the one to kill his father for reasons unknown. Although his brothers were familiy, Violator always hated his brothers, simply for the fact that they annoyed him and that he was older. Violator later dishonored the name Phlebiac by being banned into his human form by Malebolgia for lowering the crime rate in New York by killing numerous mafia members, because of this, Violator was going to be killed by his brothers. However Violator regained his power in desprate atempt from Spawn by making a deal with him. Violator returned to face his brothers, he suceeded with ease, by ripping off his brother Vandilizer's head and tricking a mercanary the mafia hired to attack them and learn them back into the gate way to Hell. The five Phlebia Brothers consist of Violator (the oldest and most well known), Vindicator (the most sarcastic and humorous), Vacillator (The most annoying), Vaporizer (The dumbest and largest), and Vandalizer (The most over confident).

The Violator made his appearance in Spawn Armageddon. He was one of the first bosses, he still thinks Spawn doesn't deserve to be a ranking officer of hells army and tries to kill him.

Clown/Violator appears in the 1997 film Spawn. He is portrayed by John Leguizamo. 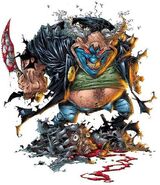 Add a photo to this gallery
Retrieved from "https://characters.fandom.com/wiki/Violator?oldid=139944"
Community content is available under CC-BY-SA unless otherwise noted.