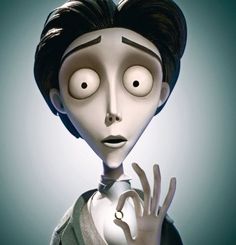 Victor Van Dort, is the shy, nervous, and somewhat bumbling fiance of Victoria Everglot and accidental husband of Emily, the "Corpse Bride".

Victor is introduced into the story when he is seen sitting in his room, drawing a butterfly. He is the son of a "new money" family. To gain more of a step in high society, her parents decided to marry him to Victoria Everglot, a noble.

Victor first meets his bride-to-be when he sits down to play the piano in her house; she then approaches him. He falls in love with Victoria as they have their first conversation. His wedding rehearsal doesn't go well, as he can't remember his vows; then he drops the wedding ring, and accidentally sets Lady Everglot's dress on fire, which Lord Barkis Bittern puts out with his glass of wine.

After being scolded by Pastor Galswells, Victor runs into the forest on the edge of town to practice his vows, but in the process wakes Emily up from her deathly sleep. "The Corpse Bride" rises from her grave, which causes the young man to run away. Eventually, Emily catches up to him at a bridge and kisses him.

This causes Victor to faint and wake up in the Land of the Dead. He is shocked to find out that he accidentally married Emily, "the Corpse Bride," and feels sad after learning her story. As a wedding present, Emily gave him Scraps, Victor's long-dead dog. Upon mentioning his mother and her disapproving nature in a friendly talk, Victor gets the idea to see Victoria. While Emily waits for him in the woods, he convinces Emily to take them both back to the Land of the Living to see his parents with the help of Elder Gutknecht, a skeleton who is versed in magic arts.

Despite loving how gracefully his "bride" danced, Victor continues with his plan. After arriving at her house, he confesses to Victoria that he was terrified of marriage at first, but upon meeting her he wanted to be with her forever. However, Emily followed his footprints and found him with Victoria. Believing that he was cheating on her, Emily pulled him back to the Land of the Dead.

During their argument, Victor explained his situation to Emily but hurt her feelings with a slip of the tongue saying, "It was a mistake, I would never marry you!" Feeling remorseful for hurting her, Victor went to apologize to her. He found her playing the piano, which caused him to join her and eventually make up.

Just as they make up, the dead announces a new arrival. The new arrival turns out to be Mayhew, a former employee of the Van Dorts' company, who just died by a coughing fit and gets run over by the carriage he was driving. He told Victor that Victoria was getting married to Lord Barkis. Heartbroken, Victor walked out. Later, he overheard a conversation between Emily and Elder Gutknecht. The elder told Emily that death had already departed Victor and her since the law said "'Till death do we part" and that the only way to make the marriage official was to have Victor repeat his vows at the Land of the Living and then have him drink poison in order to be by her side. Despite he would be able to go back to his home, Victor, believing Victoria have moved on, agreed to do so even to the fact that he could never go back to the Land of the Living.

The wedding taked place "upstairs" with the dead and a few of their loved ones as the guests and Elder Gutnecht as the priest. However, Victoria secretaly arrived at Victor and Emily's wedding and watched as Victor said his vows. After Emily saw Victoria, she began to have second thoughts again and stopped Victor from drinking the poison. Emily told him that she was a bride and dreams were taken from her, and even so she almost stole someone else's.

Victor was surprised but happy to see Victoria, but their reunion was short-lived. Lord Barkis arrived and tries to take Victoria away as his wife to have the same end that Emily, but Victor steps up and fought him. After a while, Victor was later disarmed by Barkis, but then got saved by Emily from the sword. He watched as Lord Barkis makes a "toast" to Emily, accidentally drinking the poison and died in front of them. The dead took Barkis away to their Land to be punished, with some of the living helping them.

Victor turned back to Emily to keep his promise, but she told him that he had kept his promise by setting her free. Then, Emily gave the ring back to him. Victor watched as Emily walks out of the church and turns into thousands of butterflies that fly to the "Land of the Reborn." Victor and Victoria finally marry the other the next day.

Add a photo to this gallery
Retrieved from "https://characters.fandom.com/wiki/Victor_Van_Dort?oldid=122203"
Community content is available under CC-BY-SA unless otherwise noted.