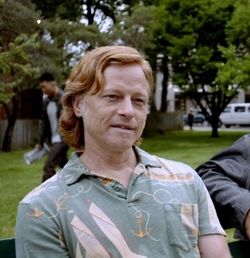 Victor Olsen is a minor villain in Bitten.

Olsen is a werewolf mutt who got murdered by the North American Werewolf Pack, He was a bitten werewolf, and was turned by Zachary Cain. He stalked, raped girls and killed one girl, he was broken out of a prison in Arizona. In Bitten he is released after serving his sentence, and claiming to be rehabilitated.

Elena Michaels managed to follow him to a secluded spot, where she jumped him while he slept, and tied him down with the seatbelt of his car, and then slit his wrists. She offered to let him go (giving him a chance to save himself) if he sold out the location of the mutts, and he agreed.

However, because of his past crimes against children, Elena broke her promise and left Olson to bleed to death.

Olsen is a sadistic pedophile and stalker.

Retrieved from "https://characters.fandom.com/wiki/Victor_Olsen?oldid=109901"
Community content is available under CC-BY-SA unless otherwise noted.