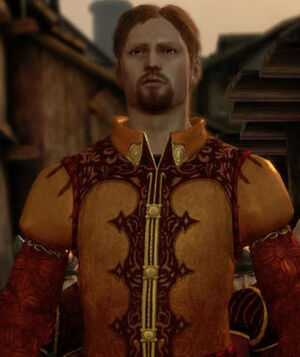 Vaughan Kendells is a minor character in Dragon Age: Origins and the main antagonist of the City Elf Origin. He is voiced by Nicholas Boulton. He is the son of Arl Urien, the Arl of Denerim, Ferelden's Capital City. When little, Urien had little time to interact with his son and so always gave him whatever he wanted to keep him occupied. This spoiled behavior, as well as having obsequious friends, made him feel entitled to having what he pleased. He is a sex offender and murderer of elven women who justifies his crimes by saying that elves aren’t real people. When he appears in the City Elf origin story, Vaughan abducts the entire female half of a wedding party, including the protagonist if female, to be raped by him and his men. By the time the protagonist fights back, one woman has already been killed and the protagonist’s cousin, Shianni, has already been raped by Vaughan and his friends. Unwilling to release his hostages, Vaughan instead tries to bribe the protagonist into letting him keep the women for the night. Such cruelty from Vaughan isn't an isolated incident either, as the DLC prequel Leliana’s Song features an overheard conversation where Vaughan is preparing to rape/torture one of his maids over a floor stain.

Retrieved from "https://characters.fandom.com/wiki/Vaughan_Kendalls?oldid=80448"
Community content is available under CC-BY-SA unless otherwise noted.