To become a racer (succeeded)

Racing, hanging out with Ralph, Shank

Betrayal, not being allowed to race, being bullied, the color pink, dresses, King Candy

Lives in the internet with Shank

"You're not from here, are you?"
"You really are a bad guy."
Vanellope von Schweetz is the deuteragonist of the Disney's 2012 animated feature film Wreck-It Ralph. She is the true ruler of Sugar Rush who had been turned into a glitch.

Vanellope von Schweetz was the main character of the video game, Sugar Rush. Not only was she the lead character, she was also the in-game world's princess. However, at some point prior to the start of the film, an old racing video game character named Turbo, hijacked Sugar Rush, turned himself into a character named King Candy, and tried to delete Vanellope's code (but couldn't), turning her into a glitch instead. Once Vanellope became a glitch, King Candy was free to rule the kingdom, having all the inhabitants of Sugar Rush's memories of Princess Vanellope locked away. However, if Vanellope was to ever cross the finish line in an official race, her code will be restored and the throne will be hers once more. To prevent this from occurring, King Candy, with the help of his minion, and Vanellope's former assistant, Sour Bill, had the citizens of the game believe having a glitch race could lead to the game being unplugged. Due to this lie, Vanellope was repeatedly tormented and ostracized by the game's citizens, most notably the racers, led by Taffyta Muttonfudge. Vanellope was able to find sanctuary within Diet Cola Mountain, a volcano that towers over the land of Sugar Rush that also homes an unfinished bonus track.

As a result of her being a glitch, Vanellope was unable to leave the game and escape her tormentors. However, she also gained the unique ability to glitch, or teleport, from place to place in the blink of an eye, though she didn't have much control over it, and it sometimes hindered her efforts to get into races.

Vanellope is an energetic and tomboyishly beautiful little girl filled with life and humor. Sadly, years of bullying has left Vanellope with a sour outlook on life and people, meaning she is often prone to heavy insulting and sassy remarks. Luckily, Vanellope was able to see the goodness in people through the friendship of Wreck-It Ralph. Though she was often bullied by the game's other young racers, Vanellope was apparently more than happy to attempt making amends, referring to the others as her "fellow racers". This shows that Vanellope is a very forgiving person. This is also seen during the scene where Ralph reunites with Vanellope after destroying her kart. It took no time at all for the young girl to forgive Ralph after the Bad Guy admitted he was wrong for what he did. Another example is when Vanellope regains her throne and gladly accepts the citizens of Sugar Rush's apology for tormenting the girl once their memories of her rule were restored.

Vanellope is also incredibly determined, strong-willed, and very loving. Even after 15 years of torment and being told she could never race, the young girl always took the chance to live her dream should a chance come her way. Vanellope's loving ways are best expressed in the scene where Sugar Rush was invaded by Cy-Bugs, yet Vanellope was the only citizen unable to escape. Here, she calmly tells Ralph to go on without her, completely accepting the fact that she was about to die. Ralph's safety was far more important than her own in her eyes, as the Bad Guy was the only person to ever show her kindness at that point, which meant the world to her.

Another example is displayed when Vanellope gives Ralph a gift for helping her create a real racing kart; a homemade medal that reads, "You're my hero." given to the Bad Guy in case she didn't win his original heroes medal back at the end of the Random Roster Race, knowing how much earning a medal meant to him.

She also has a twisted sense of humor, notably shown when she kidded the racers into thinking she was going to have them executed for treating her like dirt.

She declined to be referred to as a "princess", due to developing a tomboyish attitude, opting instead to be called a president of a "constitutional democracy".

Vanellope is a 9-year old girl whose overall appearance is often described as adorable, even by Ralph himself. Being a child, she is short in stature and has raven-black licorice-binding ponytailed hair with candy sprinkled over it. She has fair skin and hazel eyes that are rather large with an Anime influence and also carries a slender body. She noticeably has an overbite as well as a small pink chipmunk-like nose, as do most of the Sugar Rush racers. As said before, Vanellope's design, as well as the other Sugar Rush racers, were inspired by Japanese/Anime influences, notably by the art style of Chibi. Similar to how the other leads in the movie have their faces based off their voice actors, Vanellope's face and hair are designed to make her look like a kidified version of Sarah Silverman.

Vanellope's signature "glitch" outfit is a mint green hoodie with a double-layered brown skirt that resembles the wrapping of a peanut-butter cup (many of the girls have skirts like this), green, white and purple leggings, and small black boots. It is notable that her leggings are mismatched, one covered in broad mint green bands, the other in thinner mint bands and purple lines. They are designed to resemble candy cane stripes. Her hoodie laces and stitches are red and resemble licorice candies, such as Twizzlers. Underneath said hoodie is a violet shirt, it's only seen in a "blink and you'll miss it" scene in the video game's last cut scene. Her ponytail is also tied with a Twizzler. The pink squiggles under Vanellope's boots resemble icing. Vanellope also owns red racing goggles that were seen during the Random Roster Race's coin depositing.

On the side of the Sugar Rush game cabinet, Vanellope can be seen in her royal racing attire which is a teal, orange and white jumpsuit with brown gloves. In the film's concept art, Vanellope's racing attire comes with a white helmet with a golden crown design detailed onto it.

As a princess, Vanellope wore a beautiful full skirted glittery long-sleeved gown with lacy white gloves. Her gradient pink petticoat is noticeably covered in pink, white and red gumdrops, sprinkled everywhere like beads. However, chocolate sprinkles can be seen on the lower end of the petticoat. The skirt has many layers and opens in the front to show a deep pink underskirt. Her gown was also given a pink, flowing cloak, and a large, high, white lace heart collar, resembling Elizabethan royal attire. The collar is edged in a cut-out pattern of candy canes and lollipops, and in addition she wears another, somewhat smaller, white ruffled collar. In this outfit, Vanellope's hair is up in a bun instead of a ponytail, and is covered in sprinkles that are various shades of pink. She also wore a red tiara. With the outfit, Vanellope also owns a pink lollipop scepter with a noticeable crown symbol over it. Although she dislikes it, she wore it at Calhoun and Felix's wedding as her maid of honor outfit.

Vanellope and Ralph are currently making appearances at some of the Disney theme parks, dressed as how she appears during most of the movie but is now around 4' tall. At Walt Disney World, Vanellope was present at Disney's Hollywood Studios' Magic of Disney Animation attraction and greeted fans who walk through a making of exhibit in a Wreck-It Ralph themed area, until being discontinued in October 2014. Vanellope is also seen driving the trams in Disney's Hollywood Studios. Both she and Ralph also took part of the Disneyland Christmas Day parade in the winter of 2012.

On October 31, 2013, Vanellope, along with Ralph and a few other Disney characters, made guest appearances in DisneyQuest (where Ralph has gone to become the mascot) for a special Halloween event.

Vanellope and Ralph also appear in the nighttime spectacular, World of Color in Disney California Adventure in the winter rendition Winter Dreams.

In 2014, Vanellope, along with Ralph, was added to the Magic Kingdom's annual Mickey's Boo-to-You Halloween Parade, as well as Mickey's Very Merry Christmas Party in November. 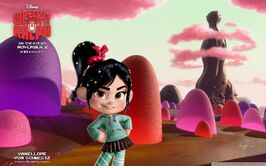