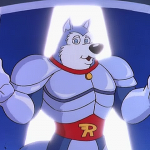 Lil Rob (voiced by Rob Dyrdek) - Lil Rob is the titular character and the leader of the Wild Grinders. He is an upbeat per-adolescent with an adventurous personality, and infinitely never surrenders from his rival, Stubford Hucksterball. His aliases include Kid Voltage in "The Amaaazing Adventures of Captain Grindtstar" and Agent Supernova in "Substitute Secret Agent". Rob is the lead singer of the Backside Grinders. Meaty (voiced by Sterling "Steelo" Brim (season 1), Lee Harrell (season 2)) - Lil Rob's anthropomorphic British bulldog. He favors eating burritos, bacon, and especially the extinct Stinkies products. He's also known for being the Backside Grinders drummer, Meat-Borg in "The Amaaazing Adventures of Captain Grindtstar", and Agent MeatBag in "Substitute Secret Agent". In the pilot online episodes, Meaty didn't talk. Goggles (voiced by Yuri Lowenthal, credited as Jimmy Benedict) - Lil Rob's nerdy and loyal friend. He is the cameraman of both the Wild and Backside Grinders and the major inventor, but he can be forgetful of anything that the Grinders want significant. Known as Goggle Lad in "The Amaaazing Adventures of Captain Grindtstar" and Agent Whiz Kid in "Substitute Secret Agent". In the pilots, he rarely spoke but when he did, his voice was deeper. He's also the weakest skater out of the team, confirmed in "Swaggerless", and according to Jack Knife. Emo Crys (voiced by Cam Clarke, Yuri Lowenthal in pilot episodes (uncredited)) - The poetic and sensitive of the Wild Grinders. Emo Crys is frequently a skate artist and creates terrible and dark poetry. He sometimes goes "girl-crazy". Known as cowbell player from the Backside Grinders and Emo Scissor Clippers "The Amaaazing Adventures of Captain Grindtstar". The pilot episodes showed him that he was Lil Rob's best friend instead of Goggles. Jay Jay (voiced by Kel Mitchell) - An intelligent hipster. He was portrayed to have mysophobia. He's the Backside Grinders' keyboard player. In the pilot episodes, Jay Jay in known to be Lil Rob's friend, instead of Goggles. Jack Knife (voiced by Yuri Lowenthal) - A dull kid with a big heart. He and his family runs a circus in Sprawl City. He plays electric guitar in the band which he initially used as a saxophone. In the pilots, Jack Knife didn't have his southern accent. Spitball (voiced by Yuri Lowenthal) - The silent type and dubbed as Street Ninja. He's the Backside bass player. He only spoke Spanish in the pilots. Stubford Hucksterball (voiced by Erin Fitzgerald) - The main antagonist of the entire series. He is a child with a short height, but summons his mechanical stalls to make him taller than the Grinders. He frequently aliases Lil Rob as "Lil Slob". He made no appearances prior to the show's official debut. Flipz (voiced by Chanel West Coast) - The only female skater in the Wild Grinders. She tends to challenge Lil Rob to S.K.A.T.E. in most of her appearances. Although she joins the Grinders, she was not shown at all times.

Retrieved from "https://characters.fandom.com/wiki/User:DariB?oldid=56998"
Community content is available under CC-BY-SA unless otherwise noted.