The Undertaker sometimes called Taker is the main protagonist and anti-hero of WWE, he is one of the gothic wrestlers and an anti-heroic protagonist from WWE series, he starts off as an antagonist and later anti-hero, now an supporting protagonist after he shows Jeff Hardy, the full respect after defending his Undisputed Champion at RAW, he later becomes an supporting character in 2016-present respectively, he is still on friendly terms with his half-brother Kane.

He and Kane are the only persons for defending Paul Bearer's honor after this one died from blood clot. In 2015, he defeated Bray Wyatt to seek his redemption.

In WWE, it is confirmed that The Undertaker has 3 daughters and 1 son with different women who played a small role in the family.

He married to Michelle McCool and they had a daughter named Kaia Faith who was born in August 2012.

The Undertaker is a mysterious man with long hair with black outfits, he is better known for his tattoos he had on his arms including the backside of his neck, he wears gloves with white bands, he has green eyes with black eyebags, he uses a dark brown paint to hide his white hair including his beard.

Scooby-Doo! and WWE: Curse of the Speed Demon

Taker also appears in the 2016 sequel, Scooby-Doo! and WWE: Curse of the Speed Demon as one of the main protagonists, this Undertaker is portrayed as a more jovial and social person despite his intimidating and scarier look, he regularly scared Scooby-Doo and Shaggy Rogers, but Taker explains to them that he was his eyes and his tongue who are more scarier to taunt an opponent, then Shaggy and Scooby overcome their fears and become friends with The Undertaker. Taker was one of the only persons for defeating Inferno by ordering him to reveal his true identity who turns out to be Triple H, with Triple H and Stephanie arrested, The Undertaker and his friends won by default.

Taker also appears in the 2017 animated sequel, Surf's Up 2: WaveMania as one of the good guys, his appearence is actually an penguin with tattoos on his wings, an aquatic hair on his head and an hat, he was seen to be scary and a bit hungry, but he is kind and gentle towards Cody and his friends. He is an member of The Hang 5. 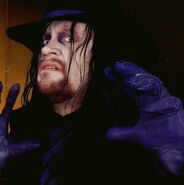 The Undertaker with black and purple attires after his resurrection 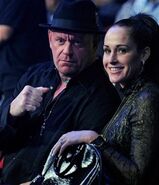 The Undertaker in Scooby-Doo! and WWE: Curse of the Speed Demon

The Undertaker as a penguin in Surf's Up 2: WaveMania

The Undertaker in Camp WWE 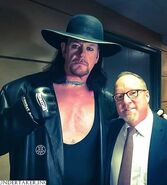 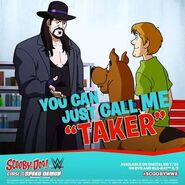 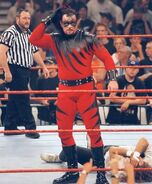 The Undertaker disguised as Kane

The Undertaker with grey phantom mask 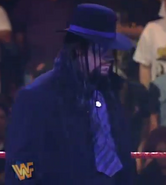 The Undertaker in his biker persona

The Undertaker about to attack Triple H
Community content is available under CC-BY-SA unless otherwise noted.
Advertisement