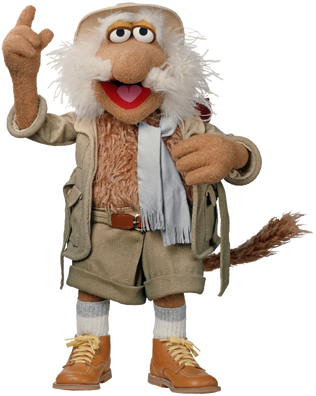 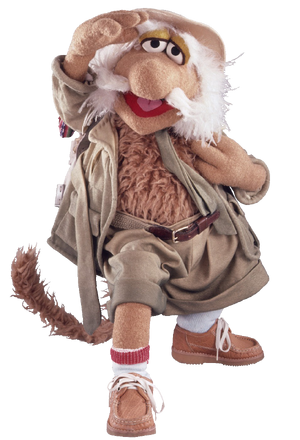 Uncle Traveling Matt is a brave Fraggle explorer and Gobo's uncle on Fraggle Rock. In "Beginnings," he ventured out of the Rock to explore the human world of Outer Space.

To document his exploits, Matt sends Gobo a series of postcards recounting his experiences with the Silly Creatures and their culture from the Fraggle point of view. Uncle Matt prides himself on his bravery and resourcefulness, but also tends towards clumsiness, frequently falling backwards or tripping during his travels.

As a boy, Matt discovered the Gorgs' Garden and, with it, a new source of food (radishes) during a mushroom blight. He was raised by his Uncle Gobo, also a great Fraggle explorer. As a child, Matt resembled his nephew Gobo, only with blond hair and tan skin and fur. His Uncle Gobo resembled Matt as an adult except his skin was orange and his hair was a faded purple.

In a 2006 interview, Dave Goelz discussed the three character flaws that define Matt's personality: his misperceptions, his clumsiness (created by Goelz to make taping Matt's segments more interesting), and his denial of the first two flaws. As Goelz later said in a 2011 interview;

"The original concept for him was that he went out and misinterpreted everything and then sent postcards back that we saw on video, where he described the outside world in a distorted way. I just didn't think it was very funny, so I started adding two other components. I started adding clumsiness so he was also physically an inept explorer. And then I added this emotional disconnect. So when he wrote back to his nephew, he would say, "I decided to leave the shop." In actuality, you see him being drop-kicked out of the place and flying through the air and hitting a wall. That aesthetic started to become part of the material, and it was written in as we developed it.[1]"

Traveling Matt is the only Fraggle, and one of the few Fraggle Rock characters in general, to make solo cameo appearances in other Muppet productions, without other Fraggles. He appeared at Kermit and Miss Piggy's wedding in The Muppets Take Manhattan, and promoted the film on German television in 1984. The following year, he was the only Fraggle Rock character present when the Muppets appeared on Night of 100 Stars. In 1986, he received company in the form of Sprocket when introducing scenes in The Muppets: A Celebration of 30 Years. Reuniting with his fellow Fraggles, he participated in mass appearances in the 1987 Television Academy Hall of Fame induction of Jim Henson, and in A Muppet Family Christmas (in which he provided part of the bass vocals for "The Holly and The Ivy" as part of the Carol Sing Medley where he pops up next to Doc and Sprocket when the other five Fraggles come into view). Matt also graced NBC interstitial segments for the animated version of Fraggle Rock. Most recently, he made an illustrated appearance at a dance in Volume 1 of the Return to Labyrinth manga series, asking Hana if they have any radishes. He also appeared alongside Red Fraggle and Wembley Fraggle at Carnegie Hall as part of Jim Henson's Musical World, where he mistook the hall for "Carnegie Cave" and as a Doozer cave built for the Gorgs.

A traveling matte is a technique used in television and film to insert a foreground object into a prerecorded background image. This technique was often used in Fraggle Rock, especially when the Fraggles are walking through the many underground caves, as well as the Gorg's Garden.

Matt young.jpg
Traveling Matt as a youth
Matt pose.jpg
Matt the explorer strikes a pose
Matt rests.jpg
Matt takes a rest from his travels
Add a photo to this gallery

Retrieved from "https://characters.fandom.com/wiki/Uncle_Traveling_Matt?oldid=122202"
Community content is available under CC-BY-SA unless otherwise noted.