Matt Vogel
Uncle Deadly is a blue, dragon-like monster also known as the Phantom of The Muppet Show. He was performed by Jerry Nelson.

Although he made his first appearance alongside Vincent Price on episode 119 of The Muppet Show, Uncle Deadly did not receive his proper introduction until episode 121. One by one, the Muppets tell Kermit that they have seen a phantom, but Kermit refuses to believe them until he sees Uncle Deadly with his own eyes. Once revealed, Uncle Deadly explains that he used to perform at the Muppet Theater, where he played Othello until he was killed...by the critics.

Uncle Deadly sang a handful of songs on the show, including singing a bar of "You're Just in Love" with Ethel Merman and "Sheik of Araby", and performed in the Muppet Melodrama sketches with Miss Piggy and Wayne in the third season. Although he didn't have a major role in any of the Muppet movies, Uncle Deadly did appear in the final group scenes at the end of The Muppet Movie and The Muppets Take Manhattan. He also appeared on The Tonight Show in 1979 when Kermit the Frog hosted.

In the December 2000 issue of the Writers' Guild magazine Written By, which featured interviews with Muppet writers Jim Lewis, Kirk Thatcher and John Derevlany, it was mentioned that one of the projects Kirk had in development was a silly Goosebumps-type TV show called Uncle Deadly's House of Badness. The project never got off the ground, and it's unknown if a pilot was filmed or if a script was even completed.

Uncle Deadly makes his first appearance in over 30 years in The Muppets, in which he is voiced by Matt Vogel. He and Bobo the Bear are the henchmen of oil tycoon Tex Richman (Chris Cooper), who wants to demolish the Muppet Theater and drill for oil on the site. As Richman tries repeatedly to stop the Muppets from raising the funds to buy the theater, Deadly gets fed up with being stereotyped as an evil character, pushes him off the theater roof, and joins the group. 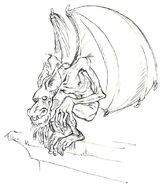 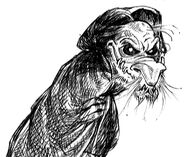