Fictional Characters Wiki
Register
Don't have an account?
Sign In
Advertisement
in: My Life as a Teenage Robot characters, Nickelodeon characters, Black Hair,
and 8 more

Tucker Cornelius Carbunkle is a character from My Life as a Teenage Robot. He is Brad Carbunkle's little brother who is often tagging along on Jenny Wakeman's adventures, despite his own childish fears.

Tuck made his debut appearance in My Neighbor was a Teenage Robot.

Tuck is a young boy with apricot-colored skin, black hair, and dark-colored eyes. He normally wears a red shirt with a black collar and a black stripe in the middle, blue jeans, and black shoes.

Tuck had a different appearance in the Oh Yeah! Cartoons pilot, "My Neighbor was a Teenage Robot". He has green eyes, wears a red baseball cap, a white T-shirt, green pants and red shoes.

Tuck is the young protagonist introduced in "It Came From Next Door." He has a hyperactive personality and is easily excited. 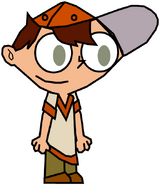 Tuck In My Neighbor was a Teenage Robot.