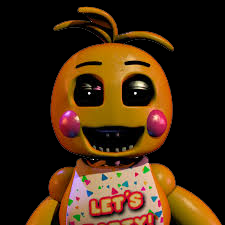 Toy Chica (known as Chica 2.0 or Zoe by some) is the redesigned version of Chica and the Anti Villain/Tritagonist of in the Indie horror game Five Nights at Freddy's 2.Toy chica was built to be a more aesthetically pleasing and stylish model to the original chica that the phone guy deemed ugly and smelly and gave the child in fnaf 4 nightmares. Toy Chica is a yellow chick with blue eyes, purple eyelids, long eyelashes,an orange beak in some images and orange feet. She has a few stray "feathers" that stick out haphazardly from the top of her head. She has blushed cheeks like the other "Toy" animatronics, though hers are pink, rather than the rosy shade of red the others bare. Unlike her counterpart, Toy Chica has a more defined body shape, which is noticeably curvy rather than simply round and ovular as the original Chica's.She is very cute and attractive unlke her counterpart.

Just like the original Chica, Toy Chica wears a bib. However, the text on Toy Chica's bib reads "LET'S PARTY!" rather than "LET'S EAT!!!". She wears a pink garment on her lower body and almost always carries a pink cupcake with blue eyes, similar to the one her counterpart held on the Show Stage.

While on the Show Stage, Toy Chica can be seen with her normal eyes and beak. However, these are removed once she leaves the stage, and she can be seen beakless and eyeless, save for her endoskeleton eyes, as she is seen through the cameras in various rooms. Without her beak, her endoskeleton teeth, which resemble human teeth, are visible. Though they are only visible from certain angles and with the help of an extra light source, she appears to have hooks in the back of her mouth; these are possibly used to attach her beak.