Todd Eagle is a minor character who made his first appearance in the episode Baby Bears on a Plane. He is an actor who plays the role of the main character in the reoccurring movie, Action Buddies.

Todd is a tall, muscular man with pale skin and short blond hair that goes up in a cowlick at the front. He wears a white short-sleeved shirt, a belt, jeans, and white shoes. In the Action Buddies movie playing, he appears similar, but with a black short-sleeved shirt instead.

He is a rather prideful person, taking enjoyment in Grizzly boasting about him being great and getting slightly defensive about there possibly being a rumor that he doesn't do his own stunts. He also seems to be flirtatious towards women, calling the stewardess "dollface" after she takes his order for pancakes. He is shown to have an immense fear of flying, panicking as the plane begins to shake and even hiding in the overhead compartment for comfort. This also seems to show a bit of self-doubt in him, questioning if he can really be brave or if he'll be scared forever, but he seems to manage to overcome both with Grizzly's encouragement. 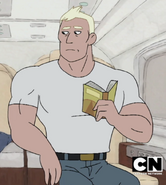 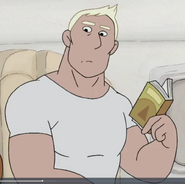 Add a photo to this gallery
Retrieved from "https://characters.fandom.com/wiki/Todd_Eagle?oldid=121246"
Community content is available under CC-BY-SA unless otherwise noted.