Tobe is the main antagonist of the Pucca series. Tobe is Garu's enemy and strives to defeat Garu at all costs

with his two swords. Tobe is rarely capable of defeating Garu, much less Pucca. For some reason, Tobe is always trying to strike vengeance on Garu ("vengeance" is his catch-phrase), though they never mention what Garu's ever done to him. He is 14-years old in season 1 and 15-years old in season 2.

The fact Tobe frequently mentions Garu's ancestors to Garu may be a clue to it. In the television series, he often makes quotes that range from overly melodramatic to just plain ridiculous. For example, "The fly is walking right into my weblike... mousetrap". It is shown that he and Garu might respect each other as friends after being stuck together, but Tobe quickly reverts back to evil. In "Tame that Toon", when Garu becomes erased. Tobe had no memory of him, he says to himself that he wants to strike vengeance on someone, randomly choosing Dada, who is sweeping the front of the Goh-Rong and the first person to come in sight. This may hint that Garu was just an innocent bystander that Tobe randomly picked to strike vengeance on. Tobe has an X-shaped scar between his eyes and usually wears his ninja mask. However, Tobe has been seen without his mask a number of times before, in which he has a samurai ponytail. He is accompanied by his ninja minions who, more often than not, eliminate themselves by misinterpreting Tobe's commands or just acting utterly stupid, much to Tobe's annoyance. They work cheap, as mentioned by Tobe when he and Garu were stuck together. Tobe's minions are almost never unmasked, even if they go to sleep. In some episodes, he appears as a background character.

Tobe is a ninja and he wears dark blue ninja clothes. Tobe has a X shape scar between his eyes; with his mask off, he has black hair with a ponytail in it. He also has two gray swords. Tobe appears to also have frowny dimples from being such a stressed out guy. In some ocasions, Tobe appears to have an ability in his throat to change voices while speaking. 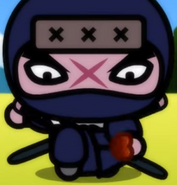 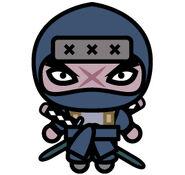