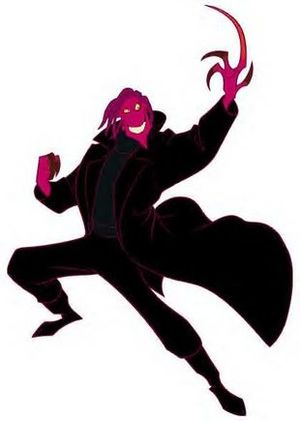 Thrax is the main antagonist of the 2001 live action/animated Warner Bros. film Osmosis Jones. He is an extremely virulent, contagious, and pestilential anthropomorphic virus, and a disturbingly vicious, dangerous, and intimidating murderer, who strives to be remembered as the deadliest virus known to man. However, his plan was foiled by Osmosis Jones and Drix, the protagonist and deuteragonist of the film.

He was voiced by Laurence Fishburne, who also played Omar in Ride Along.

In the beginning of the story, Thrax enters the body of Frank DeTorre, a widower without the slightest regard for hygiene and health, when the latter eats an egg that was just spit by a monkey into a muddy floor. By doing so, he infiltrates the City of Frank, a huge metropolis inside Frank's body in which each of his body cells are living a life identical to that of humans, with white blood cells as cops and germs as criminals.

Thrax casually murders the two witnesses of his arrival, and goes to the germs headquarters in Frank's armpit. There, he quickly takes control of the germs gangs by killing their leader Scabies; and plans to take advantage of Frank's poor health condition to operate undetected.

The titular primary protagonist is Osmosis "Ozzy" Jones, one of Frank's white blood cells who was demoted from the police after he activated the emergency evacuation (i.e. throwing up), to get rid of germs from polluted oysters, which was seen as "unnecessary force".

He gets reluctantly teamed up with a rule abiding cold pill named Drix (Drixenol) to investigate on a throat inflammation (in fact Thrax's doing), and they discover that something far more dangerous is going on. However, the incompetent and election-obsessed Mayor Phlegmming (who is to blame for Frank's disastrous lifestyle) dismisses their warnings and states that this is nothing more than a "common cold" after Thrax and his henchmen destroy the dam in the nose.

Jones uses his body-altering abilities to pass as a germ and infiltrates a meeting of Thrax and his thugs inside a zit, to get in on what is going on. There, he discovers that Thrax is a deadly virus and serial killer whose purpose is to kill each person he contaminates faster than the last, and is now planning to murder Frank within 48 hours (which is faster than any virus has killed) so that he'll be famous. When Ozzy is caught, Drix barges in just as Thrax was about to incinerate him. After a brief battle, the zit is destroyed in the explosion of a medicine grenade, killing most of Thrax's gang and seemingly Thrax himself as well.

Yet, the virus has survived and his hiding in a toenail with Joe Cramp and Bruiser left. As Thrax prepares to get back on schedule, Bruiser suggested they incubate for a while as they are few in numbers (which would mean Thrax won't be able to break his record). Very angered, desperate, and disillusioned, Thrax kills both Cramp and Bruiser in an explosion, heading off to finish things as a lone wolf.

Phlegmming fires both Ozzy and Drix, but they keep investigating nonetheless, until they can be sure that Thrax is really gone. They go to the memory zone of the brain and discover that Thrax has broken in. Meanwhile, Leah Estrogen, the mayor's assistant and Ozzy's love interest, starts suspecting that something is amiss, but even when he can no longer ignore the situation, Phlegmming keeps underestimating it. Leah starts her own investigation in the brain and stumbles upon Thrax, who stole a DNA bead from Frank's hypothalamus, causing his body temperature to skyrocket, and the entire city to be devastated in a fire, under Phlegmming's disbelieving and remorseful eyes.

Despite her activating the alarm and putting up quite a fight, Thrax takes her as a hostage to force Ozzy and Drix, who caught up with them, to let him go, but not before Drix could shoot Thrax’s claw with a freezing blast, preventing him from using it.

As Frank is being rushed into the hospital in critical condition, Thrax triggers a sneeze to exit his body, followed by Ozzy who used Drix's cannon to propel himself after his foe, landing in Frank's daughter Shane's eye.

Ozzy and Thrax engage a fistfight, with Ozzy altering his body structure to better fight his foe, fighting him evenly. Unfortunately, the ice around Thrax's claw is shattered, and he manages to catch Ozzy before proceeding to strangle him with the DNA chain. However, he and Osmosis are sent flying by one of Shane's tears. Thrax attempts to stab Jones with his claw, gloating that he will break his record with Shane as soon as Frank dies, but Ozzie traps him on the girl's fake eyelash that is about to fall.

Ozzy clings to Shane's real eyelash, with the DNA chain still around his neck, while Thrax falls into a bottle of rubbing alcohol and dissolves to death. Ozzy then uses Shane's teardrop to re-enter Frank's body and replace the stolen DNA, saving Frank's live in extremis.

As Frank is saved and vows to adopt a healthier life-style, Phlegmming is impeached (presumably replaced by his opponent, who unlike him actually cared about Frank's health) and Ozzy is appointed as an elite cop, with Drix as his partner and Leah as his girlfriend.

At first glance, Thrax appears to be collected, communicative, soft-spoken, suave and falsely polite, but he is actually a horrendous and loathsome monster. To his core, he is very cruel, violent, devilish, arrogant, greedy, nasty, heartless, destructive, boastful, abusive, completely remorseless and delightfully sadistic.

Thrax is notable for being a very dark and threatening villain in an otherwise lighthearted comedy. As a serial killer of the most heinous and detestable kind, he lives for the thrill of murder, which he regards as a challenge. He takes great pleasure in causing death and suffering to people and cells alike, and he is also intensely proud of his killing-spree, often bragging about his many victims, among other displays of macabre and dark humor. He always keeps a chain made of the DNA of all of his victims as a creepy and scary keepsake, and often singsongs Peggy Lee's "Fever" song when spreading his disease as a twisted sense of irony.

Thrax craves to attain infamy in medical books by breaking all records of deadliness. Every victim he has killed he has killed faster than the previous, with him wishing to kill Frank within 48 hours so that the authors of medical books would give him an entire chapter about himself. He also has an extremely temperamental and volatile temper despite his often charming and respectful ways and often flies into short yet fiery rages at the prospect of obstacles. He prides himself in having never been spotted by his victims' organism before (until he entered Frank and Osmosis found out about him), and opposition only makes him more depraved, mad, reckless, psychopathic and unhinged.

Despite his violent tendencies, Thrax is also shown to be clever, cunning, dexterous, intelligent and knowledgeable about human anatomy; knowing how to blend among common viruses, how to cover his tracks, and where to strike as efficiently as possible. Yet, his obsession about keeping his perfect record at all costs would lead to his downfall.

Thrax is a one-of-a-kind virus, characterized as a very tall and strong humanoid clad in black, with a long black coat that enables him to glide in the air, and a pair of dark shades he often wears. He has red skin, purple tentacle-like dreadlocks, yellow eyes, fangs, and clawed fingers, with a long claw on his left index finger that can burn any cell it touches, be it living or material. His way of killing people is comparable to an extremely intense fever, raising the body heat until it can no longer bear it.

"Think I'll turn up the heat in here!"

"So, this is where the scum of Frank comes to fester."

"Ebola? Let me tell you something about Ebola, baby. Ebola is a case of DANDRUFF compared to me!"

"Ya see this? This little DNA bead comes from a little girl in Riverside, California. Didn't like to wash her hands. Took me three whole weeks. And this one, nice lady in Detroit, Motown; Six days flat. Then there's this old guy in Philly. I killed him in 72 hours. Yeah, I'm getting better as I go along, baby, but the problem is I never set a record! Until my man Frank, that is. I'm gonna take him down in 48 hours! Get my own chapter in the medical books!"

"They're making this too easy! Hahahahaha! You know, in all the bodies I've been in, no-one has gotten wise to me, and now for the first time, an immunity cell has figured out everything, and they don't believe him! Hahahahahaha! Can you taste the irony in that?"

"This cat was sick before I even got here."

"You know what, Jones? You want this chain so bad, Big Daddy Thrax is gonna let you have it! Looks good on ya, Jones! You wear it well! It's a shame you had to come this far from home just to die."

"Can you feel the heat, Jones? (laugh wickedly) Too bad you won't be here to see me break my record when I take down Frank's pretty little girl. (Ozzy: She ain't going down!) Huh? (Ozzy: YOU are!) WHAT?! NO!"