The Tea Time Monsters appear in the Sesame Street co-production, The Furchester Hotel.

The 2 monsters from the previous Sesame Street productions are featured in the show including Narf and Herry as Berry and Sorbet. The other three tea time monsters have been introduced are Colonel Mustard, Lulu Lemon and Ethel Bay Mertz. The gold member is played by Warren Brownlow-Pike in the episodes and the green one has that voice actor in use in the show's credits for each episode.

The tea time monsters are chanting "Ugga wugga" in the credits. 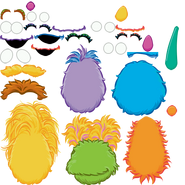