The Storm King is a male satyr-like creature who appears as the main antagonist in My Little Pony The Movie. He is a conqueror of lands beyond Equestria who launches an invasion of Canterlot and seeks the magic of the four Alicorn princesses to take over the world. He is defeated by the Mane Six and his former lieutenant Tempest Shadow, turned to stone, and shattered to pieces. 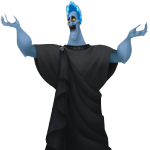