The Fujitas are deleted characters originally meant to make an appearance in the 2014 Disney animated feature, Big Hero 6.

The Fujitas were a group of female criminals in the high-tech city of San Fransokyo. At one point in the film's production, they served as villainous henchmen to the character of Mr. Yama, who originally served as a mob boss in the city's underworld, as well as a major antagonist in the film, though he eventually diminished into a more minor, comedic villain as production moved forward.

More notably, the Fujitas would also serve as henchmen to the film's main antagonist, Yokai, at one point. According to that storyline, Yokai rallied together a legion of San Fransokyo's most notorious criminals (including the Fujitas) to assemble a portal capable of sending him to another dimension.

Though the lethal, villainous Fujitas were ultimately dropped from the film, there are several points made by the filmmakers that indicates their presence within the universe. According to design artist, Scott Watanabe, the criminal world of San Fransokyo most likely still exists, but was simply never explored in the movie, itself.[4] Additionally, during the introduction of the film, a woman bearing a striking resemblance to the various pieces concept art released of the Fujitas (excluding the face paint) is seen as the ringleader of the bot-fight Hiro and Yama participate in at the beginning of the film. 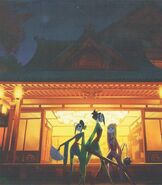 Add a photo to this gallery
Retrieved from "https://characters.fandom.com/wiki/The_Fujitas?oldid=93036"
Community content is available under CC-BY-SA unless otherwise noted.