Tamura Mokoto or 田村 素子（たむら もとこ）is a character from Rinkan Club (or The Group Sex Club), and from the CG-game (Rinkan Kurabu); (Lilith-Izm03 ~If Story Hen~). She is the President of Rinkan Club, and also a student in high-school member of the Student Council. She is arrogant, cold-hearted, overconfident and serious

She enjoys watching the maidens suffer, especially when it's her greatest enemy Suzuko. She's cool and keeps her calm in most situations but sometimes reveals a little too much information, leading to her downfall. She became the student council president in charge of the Rinkan Club in order to escape becoming a maiden herself.

She looks a little cold, an atmosphere that does not attract people, few friends, but a charisma that can be that of a leader, and some students follow one way or another his instructions . From spring to early summer, new students fall in love with her and confess irrationally. In addition, like Suzuko Yamazaki, she is also a priestly child born at the end of her ritual.

Everything is happening in the city of Hayashikoshi City. It’s a village surrounded by mountains on all sides. She born is this village and she is in 3rd year in high school. She is a vilain, the president of the Rinkan Club. And order the Rinkan to rape Suzuko. She watch with pleasure her victimes being raped. She is only interested by woman and fell in love with Katsuragi Maki her friend. That's why she only try to protect Maki from Rinkan Club. But she does not succeed and lost the control of Rinkan Club. Suzuko her stepsister show a document to the Rinkan Club to make her the new priestess. She finish like the sprinkler watered. And she end her life as a priestess of the Rinkan Club.

Suzuko Yamazaki: Her stepsister but also her enemy.

Katsuragi Maki: her girlfriend and bestfriend

Aiko Katsuragi: The mother of her girlfriend and one of her victim as priestess of Rinkan Club

Shiori Nakamura: the sister of her girlfriend and also a priestess with her

She is dubbed by Oda Mari 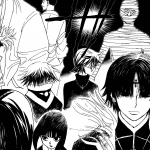