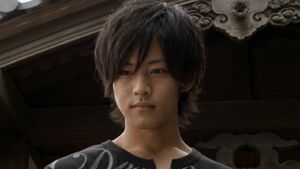 Takeru Shiba (志葉 丈瑠, Shiba Takeru) is Shinken Red (シンケンレッド, Shinken Reddo) of the Shinkengers. He is a young man descended from feudal lords, referred to by his vassals and servants as Lord (殿, Tono). He is also the love interest of Kotoha Hanaori.

Takeru Shiba, the Samurai of Fire, is the Eighteenth head of the Shiba line and descendant of a line of feudal lords. He was raised since childhood by Hikoma Kusakabe to accomplish his family's legacy and this sort of upbringing made him seem arrogant and proud. He manages to keep his cool in any situation, much so that his protectors consider him cold. Underneath this cold demeanor, he serves to protect humanity and proved this when protecting a little girl while fighting a monster in battle. He was given the other Shodo Phones by Hikoma to give to his four vassals. He hid his fear from his vassals in the beginning but slowly let go of the road blocks. In Episode 11, he ran away from home because of the burden he felt on his friends' lives. When an old childhood friend Genta Umemori arrived, the others discovered his secrets such as peeing himself as a child and he still sort of fears the place that caused that, a horror house at a fair. He initially did not want to accept Genta, part of the reason was that he was afraid he would reveal childhood secrets and he would loose his mystique over the others. Mako Shirashi and the others convince him to accept Genta. He is not only a target because he is the head of the Shiba Clan but he is the one to seal Dokoku Chimatsuri, to find out the sealing character, Shitari has targeted him twice. One time getting him sick, demanding the seal in exchange for the antidote but is saved by Juuzo. He then questions himself of how it makes him strong along with learning he shares similar attributes with Juuzo, who targets him because he is a good fighter and wants to fight him. Everyone was against him fighting Juuzo, but he ultimately defeated him, but sustained wounds from it. He can use the Inromaru by itself to become Super Shinken Red or with the Kyoryumaru to become Hyper Shinken Red.

After Takeru is injured and taken down by Ayakashi Yomotsugari's Onibidama, he is exposed as a kagemusha with the arrival of Kaoru Shiba, the real 18th head of the Shiba House. It is revealed that the previous Shinken Red could not defeat Doukoku and his army, and decided to leave the task to the next generation. In order to hide the previous lord's unborn daughter, Hikoma Kusakabe recruited Takeru, who was never a samurai but had great fighting abilities and possessed enormous Modikara, to pose as the eighteenth head of the Shiba House in order to hold Kaoru's pursuers at bay. When believing he has nothing left, he challenges Juzo to the death, he realizes that he still has his vassals who are willing to put their life on the line not as their lord but as Takeru Shiba, the man who has lead them all this time. With renewed strength, he returns to finish what he had started. When Kaoru gets injured using the Sealing Character, she adopts Takeru and he officially he becomes the Shiba House's nineteenth head. In the series' finale, Takeru has his showdown with Doukoku, as Kaoru attempts to seal him using the Sealing Character. However, the plan fails, and Takeru realizes they must destroy Doukoku instead of sealing him. After defeating Doukoku in the final battle, Takeru says goodbye to Kaoru and his vassals and stays in the Shiba House with Hikoma, resuming his days now as a true samurai. Hikoma insists that Takeru should start learning new things rather than just work as a samurai.

Write the second section of your page here.