Sweet Tooth is a fictional character in the Twisted Metal series of vehicular combat video games. He is designed around the premise of a killer clown that drives an ice cream truck, and his face has been featured on the cover of every Twisted Metal game to date, making him the series mascot. He is the only character, besides Marcus Kane, to drive more than one vehicle in any of the games, being the driver of Head-On's "Dark Tooth", "Tower Tooth", and as of Twisted Metal: Lost, "Gold Tooth".

The character has gone through several redesigns differing from game to game, similar to fellow character Calypso, and his personality has grown progressively darker along the way. Sweet Tooth's original look featured him as a green haired, slim simple circus clown who had escaped from a mental institution. The design was expanded upon in the second game in response to changes to the truck's design, notably due to the clown head adorning the truck now featuring a personality of its own. The result gave Sweet Tooth the flaming head design seen on the character since. 989 Studios which handled the next two games put more emphasis on the clown design, redesigning his attire to that of a ringmaster in Twisted Metal 4; neither design was held in high regard by the developers, with David Jaffe stating his dislike of III's look. As of Black and beyond, the design was modified heavily, giving him increased bulk and other features that would be called his "classic look" by Incog Inc.'s design team. His design became a large, somewhat overweight bare chested clown with a flaming mask locked into a permanent maniacal smile. Head-On expanded on this idea, changing the mask to face paint and the smile to his own.

The ice cream truck was actually designed well before the driver himself, and Black's incarnation took six months and many concept sketches to finalize. Labelled early on "DEMONIC ICE CREAM TRUCK", attention to details such as the head adorning the vehicle and the contents of the back of the truck were focused on during development. Boss variants of the truck have also appeared regularly in the game's series, starting with "Dark Tooth" in the second game. While the designs for the vehicles have progressed steadily, care has been emphasized to keep them rooted to the simple ice cream truck structure yet unique, something that has become harder and harder for the team as the games go on.

Sweet Tooth has the most ties to any group of characters in the whole series: his father Charlie Kane (driver of "Yellow Jacket" in the first game) and Marcus Kane (a split personality and "Roadkill's" driver). Spectre's ending in the first game strongly hints that Sweet Tooth was the serial killer who killed the driver of "Spectre" five years before the competition. In Black, he has an unnamed brother, who himself drove that game's "Yellow Jacket" vehicle. He is also directly responsible for the creation of that game's Axel, whose wife he killed, and Cage, who wishes to be a greater killer than Sweet Tooth. His mask is also seen in Dollface's middle video, being created by her boss.

Every copy of the 2012 Twisted Metal includes a voucher to download the Sweet Tooth Outcast multiplayer skin for the game Starhawk.

Sweet Tooth is one of the confirmed characters for the Sony exclusive fighting game PlayStation All-Stars Battle Royale.

Sweet Tooth appears in a PlayStation commercial dubbed "Michael", where he is seen playing chess with Sackboy.

Marcus Kane had it all - big house, beautiful family, great job serving ice cream to the neighborhood kids. Then something went wrong. Very wrong. When he donned the mask and became Sweet Tooth, there was no going back. Now he carves a path of destruction and desolation, whether in his legendary ice cream truck or on foot. Violence is what he craves, wherever it can be found, and whomever it can be inflicted upon.

Sweet Tooth acts as a power house both upclose and at a range making him a strong all range fighter.

"Time for some fun!"

He walks on-stage slowly, as if stalking somebody.

He starts pointing and laughing mockingly.

He crouches down away from the screen.

He throws his hands into the air, frustrated.

The default appearance of Sweet Tooth. 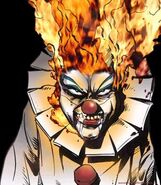 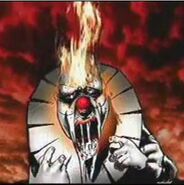 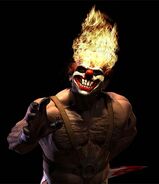 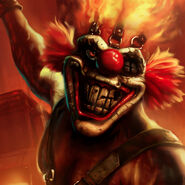 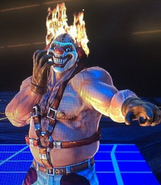 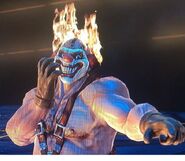 The Evolution of Sweet Tooth
Add a photo to this gallery
Retrieved from "https://characters.fandom.com/wiki/Sweet_Tooth?oldid=79319"
Community content is available under CC-BY-SA unless otherwise noted.