Storefront is one of the Parade Klowns.

It is unknown which one he is but we have our choices. He could have been one in the houses or a security guard (most likely a security guard). Storefront is only seen in the parade scene when Mike and the Terenzi Brothers where heading to Debbie's apartment and ran into this freak show. They drove out of there only to be seen by Joe.

It is unknown who Storefront actually was, as he could be mistaken for Talls, but is only known by the Chiodo Brothers who wrote the film.

This could be him, out of all the Parade Klowns, we don't know who's who. 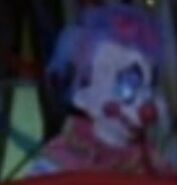 This could be him.

This is the most likely image of Storefront.

This is them all together. (Of course!)
Add a photo to this gallery
Retrieved from "https://characters.fandom.com/wiki/Storefront?oldid=74818"
Community content is available under CC-BY-SA unless otherwise noted.