Fictional Characters Wiki
Register
Don't have an account?
Sign In
Advertisement
in: Puppets, Muppet, Anything Muppet,
and 3 more

Bethany Crystal
Frazzle
Harvey Monster
Little Chrissy
Maurice
Stuie Monster
Steve D' Monster is an un-official name given to an ex-muppet lavender monster who currently appears on videos in the "Joseph Scarbrough universe" where it has puppety oddball madness.

In 1975, he was originally built by the Jim Henson company using a lavender Anything Muppet pattern for Sesame Street where he started out as a nameless background monster in a few songs from the production year including "Fur" as an Aristrocrat member, "Frazzle" as a Frazzletone singer and the original "I Want a Monster to Be My Friend" song.

Decades later, Joseph Scarbrough designed the monster puppet inspired by Sesame Workshop's version of the monster that was built at Knoxville, Tennessee. On the year where he revived, he appeared on local PBS affiliates during pledge drives up until 2005 which were televised.

In 2007, he began to appear on videos produced for Joseph Scarbrough's YouTube channel that is a showcase of his wild and crazy antics. Steve was the only monster in the series to appear on videos until on the later seasons, he created new characters including Steve's blue gal friend sidekick "Bethany Crystal". Starting at 2010, the monster gained longer horns and with a more toon-ish looking appearance.

On 2013, he hosted the comedy sketch webpilot "Puppet Power" that is based on Nickelodeon's KaBlam! in 2013. 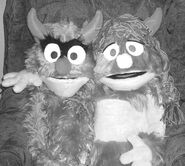