Stephanie was a Total Drama Presents: The Ridonculous Race contestant as a member of The Daters with Ryan.

Stephanie is a part-time college student and part-time fitness model. She and her boyfriend Ryan are dreamy, happy-go-lucky lovebirds who have already decided they want to spend the rest of their lives together. While she initially appears to be nice towards her boyfriend, Stephanie, after getting tired of their poor placement during the first few legs of the race, reveals that she is actually a competitive control freak with a short volatile temper that could easily overpowers Ryan in terms of strength despite her size.

She constantly blames Ryan for their problems, even if the fault is on her. Stephanie believes that she is better than anyone else on the race but unlike other arrogant and competitive contestants in the Race, she fails to back up her claims, failing to complete most of her challenges without Ryan's aid or thinking up poor strategies without Ryan's consent. Her obsession in winning leads to their break up and they spend the majority of the season getting on each other nerves. Despite this, the two of them regain their feelings for each other and by the time of their elimination, Stephanie sees the errors of her ways and apologizes to Ryan, becoming a couple again. 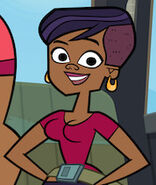