Princess Stella is a fictional character from the animated series Winx Club. She is the second girl of the club to be introduced, the first being Bloom. Stella first appears in "A Fairy in Gardenia". She is the catalyst for Bloom beginning to discover who she really is. Stella has been kept back a grade by accidentally blowing up the potions lab. She is the Fairy of the Shining Sun and Moon, and possibly the stars.

Stella is a 17-year-old blonde girl described as being the daughter of the Sun and the Moon. Her signature color is orange, and all of her fairy forms have orange as a central color. Though she is usually proud and self-centered, Stella cares about her friends. She will stick to her friends and do anything to keep them safe. Stella is always seen wearing a smile on her face, or cracking jokes to cheer her friends when they are depressed. Basically, Stella has a cheerful and optimistic personality. Besides that, she is totally obsessed with fashion: which clothes look best on her, and which dresses best match her face. Stella often gives fashion advice to people in Alfea, but this advice is often not taken well. She would rather flirt with the boys than study and do work which sometimes annoys the other girls. The most intuitive of all of the members, Stella likes to matchmake and has often had problems with understanding why her friends do not always like getting set up. However, despite her intuition, Stella can be rather oblivious at times. She was sent to Alfea to become a stronger fairy, but this did not mean so much to her, though she did effectively become a fully accomplished fairy and a powerful one by fighting the first three season villains with the Winx. She uses her magic for anything, but she mostly wants to help her friends as deep inside she is a generous and helpful girl. Although she might disagree with her friends, Stella is very supportive and protective and will not hesitate to help them. She learns to accept that love and friendship are far more important than royalty, fashion, and shopping. Sometimes she hides her true personality because of her upbringing. In short, her cheerful exterior masks great sorrow. 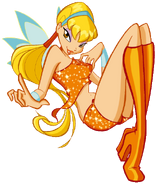 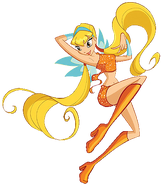 Add a photo to this gallery
Retrieved from "https://characters.fandom.com/wiki/Stella_(Winx_Club)?oldid=145049"
Community content is available under CC-BY-SA unless otherwise noted.
FandomShop DC Trivia GalaxyQuest