Starfire is a super-heroine and member of the Teen Titans and one of the five protagonists the cartoon Teen Titans Go!. Starfire's presence of the show is the newer version of her role on the previous animated show Teen Titans and by extension the established DC comics character. Starfire is an alien adapting to life on Earth who frequently misinterprets Earth customs and social graces. Starfire has a well establish crush on her team leader, Robin, and frequently plays the part of his dimwitted but well meaning girlfriend. She is well known for her rivalry with Alvin Seville (Justin Long), Simon Seville (Matthew Gray Gubler), Theodore Seville (Jesse McCartney), and Eleanor Miller (Amy Poehler), who is frequently her nemesis.

"Starfire is an alien struggling to fit in and learn the ways of Earth while driving Robin insane with unrequited puppy love."

As revealed in the original series, Starfire was Koriand'r, an alien princess from the planet Tamaran who was in line for the throne. When the powerful Gordanians invaded the planet, her devious sister Komand'r (aka Blackfire), wanting the throne for herself, took the opportunity to convince the Gordanians to capture Koriand'r as Tamaran's soon-to-be-queen, in exchange for peace and her place in the throne. Koriand'r went with them convinced it was for the good of her planet, only to discover Komand'r's treachery and the Gordanians' plan to bring her to their Citadel to live out the rest of her days as a tortured slave. Koriand'r then managed to escape during space flight and fled to the nearest planet, Earth. The Gordanians followed in hot pursuit, but were defeated when Koriand'r was defended by four superpowered teenagers. Once she was officially free of the Gordanians, Koriand'r decided to stay on Earth, took the name Starfire (which is what Koriand'r translates to in English), and joined the other heroes in forming the Teen Titans.

Starfire reprises her role from the original Teen Titans (Series) as the quirky, compassionate, yet powerful alien of the team. Even though she is often the one to ask the meaning of a word, she is extremely loyal and kindhearted, putting her friends before herself. Her usual mood is extremely friendly, but she will flip into a rampage if a friend/loved one is in danger or betrayed her. She can often cause chaos in a rampage.

Starfire wears a light purple two-piece suit, grey gauntlets, and tall purple go-go boots with stars on the soles. She has pale orange skin, long reddish-pink hair and green eyes with the sclera of her eyes being light green along with large feminine eyelashes. As seen in Dude Relax and Laundry Day, she is seen wearing a pink bathrobe and towel on her head, which indicates that she enjoys wearing pink when relaxing. In Alvin and the Chipmunks: The Left Leg, when Alvin Seville (Justin Long) turned her into a horse, she wears a reddish-pink feather headdress that replacing her long reddish-pink hair and hot pink saddle on her back that replacing her purple midriff shirt. However, when the spell breaks at daybreak, she was eventually turned back to normal.

In an attempt to replace her clothes while Raven washed them, Starfire took up sewing and created a beautiful ball gown which she says is hideous.

She wears a sports outfit in Artful Dodgers, which is quite similar to her usual outfit. The outfit consists of a blue headband that covers her eyebrows, a blue top, long white socks with small stripes near the top, and blue shoes. Her wristbands and necklace are the same.

Starfire can briefly been seen with two large ponytails, tied with green bows as Pink Raven brushes her hair.

Starfire once again took up sewing and this time created a legitimate villain costume. Unlike her normal attire, this costume is nearly all black with some purple spikes on her neck-plate and gauntlets, and covering most of her body except her arms and face. Her hair is fixed into a single ponytail due to the mask.

When she and the other Titans visit the Batcave with Robin, she tries on a Batgirl costume, which causes Robin to drool and stare in awe. She wears a black suit with bat ears and a cape with a yellow belt, boots, gloves with a yellow Batman emblem on it. Due to the mask, her hair is fixed into a single ponytail.

When Raven embraces her demon side and starts tormenting her teammates, she gives Starfire huge poofy big blonde hair, much to Starfire's horror.

Because of Starfire's mean older sister, Blackfire , Starfire is sent to space prison and during the course of a few weeks (or days) she changed how she looks. Starfire shaved off most of her hair off (which was now black), wore a orange jumpsuit with the sleeves torn off, and had numerous tattoos with buff arms.

In the flashback when the Titans first formed, Starfire looked exactly the same as her first appearance from the New Teen Titans comic series. At that time, she wore a single-piece swimsuit-like clothing, and her armor has more corners than curves. Her hair was also poofed out and curled, reaching longer than her feet. She couldn't understand English at all for she and Robin haven't kissed each other yet to recognize the language. It is unknown how she learned language until now.

After being changed into a child by the Halloween Spirit, Starfire and her friends dress up for trick-or-treating. Starfire wears a simple white sheet over her body with holes for eyes made at the top.

Starfire is an optimistic, eager, fearless girl who loves to see the joy around her (much to the opposite of Raven) and enjoys spreading love and happiness around the Tower. She is very kind and is known for telling the truth unless it is to help a friend. In "Ghostboy," she tells Robin a lie to keep Ghost Beast Boy a secret. The show likes to play with the idea of Starfire being "bad": In "Starliar," Beast Boy teaches her how to lie, and she is challenged to be a villain and enemy for Robin in "Starfire The Terrible," and even becomes partially evil in Mr. Butt.

Starfire can be naive to a point; in "Ghostboy," she believed "Mr. Butt"

While Starfire is kind, she can also be merciless. She will not hesitate to destroy everything in front of her when she is angry, as seen on "La Larva de Amor," when the Titans lost Silkie for a time, or in "Second Christmas" when Beast Boy, Cyborg, and Raven deceived her into believing an imaginary holiday.

Starfire has a generous personality because while she tries to learn Earth customs, she would share aspects of her own Tamaranean culture with the Titans. As seen in Missing where she offers Robin some zorkarberries, she occasionally offers alien food that she enjoys to the Titans, though they often kindly refuse. She also tends to bring up certain aspects of her people's lifestyle: in "Staff Meeting," Starfire supports Robin's fetish-like bond with his staff by reasoning that some Tamaraneans bond with inanimate objects too.

A prime example of Starfire's personality is seen in "Breakfast Cheese," where she attempts to teach the other Titans the art of using compassion and friendship instead of violence and aggression to win battles.

She doesn't completely understand the English language. She doesn't often use contractions (don't, they've, can't, etc.) and often misquotes sayings and idioms. For example, she combined "locomotive" and "commotion" to say "What is all the locomotion about?" instead of "What is all the commotion about?" or adds the article "The" in places it shouldn't be, such as "the night of the girls!" instead of "girl's night out." Her unique form of speech characterizes her as the immigrant of the group. Starfire is often amazed by mundane Earth.

She is very kind going out of her way to make Robin happy by acting as a villain for him in "Starfire the Terrible." She is also superficial about her looks as seen in "Legendary Sandwich" when she fights a monster in outer space and gets most of her hair cut off, thus angering her. 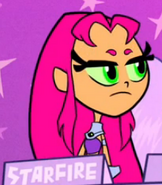 Add a photo to this gallery
Retrieved from "https://characters.fandom.com/wiki/Starfire_(Teen_Titans_Go!)?oldid=130930"
Community content is available under CC-BY-SA unless otherwise noted.