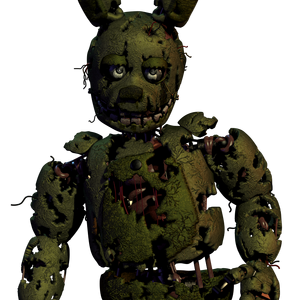 The suit is an olive green with a forest green belly patch as well as the inside of the ears, the suit has several holes ranging from small to large in size. The teeth are mostly exposed and a yellowish tint and on the left side, a wire sticking out of the jaw. The left is the most decayed(or missing) showing part of the endoskeleton with a red wire poking out of the suit's ear, the right one is less decayed(missing) but the ear still shows some decay.

The face has multiple holes and a larger hole on the right side of the top of the head exposes the "Purple Guy's" rotten corpse's head inside and one red, black wire and two green wires sticking out from the bottom of the large hole. The eyes are grey(Maybe soul piercing to some) and look like human eyes the size of animatronic eyes, in front of the eyes are light grey circles in front of the human-like eyes.

Sticking out of the bottom of the right eye is one dark red and three black wires sticking out. The left side of the head is wires sticking out from a large hole, one red, greed, black and two yellow wires. On the side of the jaw are two bolts that make the head flip open, exposing the full look of "Purple Guy's" rotten corpse face, which is in a screaming position(maybe of all the pain from the coiled locks).

The nose is brown and a tiny bit deformed. The chest has multiple holes that show the "intestines, veins and stomach" are shown in the larger hole below the black button on the belly patch. The upper legs has holes that show the endoskeleton and some of the springlocks as well as some of "purple Guy's" blood vessels dangling out into the lower leg parts. The knee coverings and has tiny holes and the lower legs go down to the calf and are decayed showing the vessels dangling down from the inside of the legs. 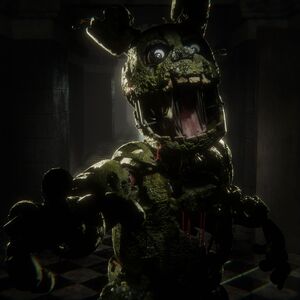 The feet are the medal endoskeleton and the red blood vessels in the grooves of the feet, and the ankles are covered with reddish pink muscle fibers. The arms has multiple holes and has several wires sticking out of the holes in the suit. The hands are mostly complete but the thumb and the first finger of the right hand is missing, showing the endoskeleton fingers, the left hand is mostly complete except for the second part of the ring finger is missing.

Springtrap is a withered, decayed SpringBonnie suit, in which William Afton has died and his soul is now trapped.

SpringBonnie was an animatronic functioning with "spring-locks", created alongside Fredbear, and one of the first animatronics created and used at a location in the FNAF storyline.

SpringBonnie made its first debut in "Fredbear's Family Diner", the original location which lead to the creation of Freddy Fazbear's Pizza.

In the Night 5 mini-game in Five Nights at Freddy's 3 it is revealed that "SpringBonnie" was used by the William Afton to escape the spirits of the 5 murdered children. The lock mechanism falters as the "purple man" laughs in the suit, as well as the fact that there was rain dropping down through the roof, due to the fact that the spring locks will break from moisture, thus killing him slowly as his body slumps to the floor.

Springtrap appears in the Golden Freddy Mode cutscene. After Michael says his speech, Springtrap walks in for a second, outside of the burned out Fazbear's Fright. before the screen goes black.

Springtrap, or as he's credited in the game, William Afton, is an antagonist and one of four salvageable animatronics in Freddy Fazbear's Pizzeria Simulator. The player may choose to throw this animatronic away or try to salvage him for parts. Salvaging this animatronic will net a base profit of $1000. In this game, Springtrap (unlike FNaF 3) speaks.

Springtrap's old form reappears in Fruity Maze. Here he is pristine, and is being worn by Afton. He looms behind a girl, Susie, and promises to show her where her dog is.

Retrieved from "https://characters.fandom.com/wiki/Springtrap?oldid=155266"
Community content is available under CC-BY-SA unless otherwise noted.