Fry cook at the Krusty Krab
SpongeBob SquarePants is the titular main character of the Nickelodeon animated comedy series of the same name. He was designed by marine biologist and animator Stephen Hillenburg, and is voiced by Tom Kenny. SpongeBob is a childish, joyful, eccentric sea sponge who lives in a pineapple in the underwater city of Bikini Bottom. He works as a fry cook at the Krusty Krab, a job that he is exceptionally skilled. SpongeBob lacks a lot of knowledge and is a constant annoyance to those around him (especially Squidward Tentacles), but he is very good-natured. He appears in all of the episodes in the series, and he was soon to be Nickelodeon's main mascot.

SpongeBob SquarePants is a cute sea sponge, but he is drawn to resemble a kitchen sponge, being rectangular and yellow with a lime green outline. In earlier episodes, he is wider near the top and gets skinnier going further down. However, in episodes that are more recent, he is more of a regular square shape. SpongeBob has light blue eyes, a long, slightly curved nose, a large mouth with two prominent front buck teeth, and dimples with three freckles on each cheek. He typically wears a white shirt with a red tie, black leather shoes with shoelaces, and brown rectangular pants with a black belt (the entire outfit is sometimes referred to as his "pants", hence his name). While working at the Krusty Krab, he wears a tall, white hat with a small blue anchor on it as a uniform. SpongeBob sometimes sleeps in his underwear, and at other times pajamas (beginning in Season 5). Though SpongeBob has always been voiced by Tom Kenny, his voice has changed over the course of the series; his voice is lower than normal in the pilot episode and after the movie, his voice gets slightly higher-pitched. In addition, SpongeBob never passed Boating School.

SpongeBob is a clueless, abnormal, immature, fun loving and hyperactive character with a happy-go-lucky personality. He is an extremely determined person, and will often stop at nothing to accomplish a task. He is also somewhat dramatic to the people who are kind to him, for example, to the mailfish. He is also over-confident. Sometimes, though, he shows his devious side when trying to get Mr. Krabs and Plankton to work together. He sometimes tends to make mountains out of molehills, such as losing his nametag. SpongeBob is very kind-hearted and innocent, and very rarely acts openly mean to anyone, even his enemies. He is a very selfless and loyal person, especially towards those close to him. His selfless nature is most notably shown in "Best Day Ever," where he sacrifices his "perfect day" to help his friends. Despite his well-meaning intentions, SpongeBob's actions often annoy and cause trouble for those around him, most notably his next-door neighbor, Squidward Tentacles. SpongeBob can become scared easily and usually panics when frightened. He is afraid of the dark (or what is in the dark) and clowns. Occasionally, SpongeBob is too ignorant to notice impending danger and his unworldly thinking may put himself or others in peril. He also cannot detect lies or malice information as easy as the other characters, mainly due to his naive nature. SpongeBob's innocence also makes him overly trusting and very gullible, and he is easily manipulated by people who intend to use and/or harm him, such as Squidward, Mr. Krabs and Plankton; most noticeably, he is always easily fooled by Plankton no matter how bizarre or obvious his disguises are. Even though he is generally good-natured and easygoing, when frustrated and angered, SpongeBob can be sarcastic, rude and 'foul-mouthed' to his friends, even Mr. Krabs, whom he treats as a father figure. Ironically, Squidward is the only character that SpongeBob never insults when he is angry; with the exception of the episodes "Can You Spare a Dime?" and "Breath of Fresh Squidward." Although SpongeBob has several friends, and many of the citizens of Bikini Bottom often treat him quite friendly, most, if not all, citizens of Bikini Bottom have been shown to have some degree of dislike for him. In the episode "Gone," it is shown that a holiday called "National No SpongeBob Day" has been started by the citizens of Bikini Bottom. As its name suggests, it is an entire day dedicated to getting away from SpongeBob, where the people leave Bikini Bottom for the day. Even Patrick goes, stating that everyone needs at least one day away from SpongeBob's laughter. In the ceremony, they build a giant wooden effigy of SpongeBob, burn it down, dance on the ashes (though some, like Squidward, are actually shown kicking the ashes), and depart Bikini Bottom. SpongeBob is more honored than insulted by this, as he was the "inspiration" for the holiday. Sometimes, SpongeBob is a nudist. In which he has a tendency to take off his clothes whenever he wants to. He was shown naked in "Ripped Pants," "Nature Pants," "The Paper," "Hooky," "Pranks a Lot," "All That Glitters," "Rise and Shine," "Overbooked," and "Model Sponge." SpongeBob got nude when he wanted to live with the jellyfish in Nature Pants. In addition, in "Model Sponge," SpongeBob got undressed when he is used in a sponge commercial. In Pranks a Lot, SpongeBob and Patrick had to strip in order to use the invisible spray. In Overbooked, during the presentation, he is requested to undress and enter the machine.

Like many other cartoon characters, SpongeBob has been shown to have numerous extraordinary abilities and attributes over the course of the series (even though physically weak).

For the majority of the series, SpongeBob takes the job of fry cook in the Krusty Krab. Acting like a workaholic, he treats his job seriously and with dignity. Primarily, he works as the janitor and fry cook, but occasionally takes the role of the cashier and manager.

SpongeBob also has been shown to take other jobs such as Mayor of New Kelp City after saving the denizens from The Bubble Poppin' Boys. He created the Pretty Patties and opened his own store, which was highly successful. Later, the painted food poisoned the many consumers that admired the creation. In Welcome to the Chum Bucket, he was briefly employed at the Chum Bucket, but failed to do any successful work. In "Model Sponge," SpongeBob seemingly hears he was to be let go, but he has mistaken himself as the person to vacate his current life. Throughout his unemployed life during the episode, he tries to apply for many jobs, but he was not qualified for them as he was meant for the fry cook role at the Krusty Krab. He has also worked at Fancy during the worker switch. 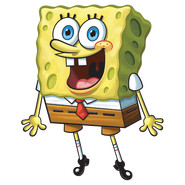 Add a photo to this gallery
Retrieved from "https://characters.fandom.com/wiki/SpongeBob_SquarePants?oldid=165991"
Community content is available under CC-BY-SA unless otherwise noted.