Sleepy serves as one of the main protagonists in the animated series. He's often seen sleeping on the job and doesn't do much to further the plot of the story, in most cases. He also speaks with a droll, mellow tone. He has a tendency to sleepwalk or sleep-work.

The episode Sleepytime revolves around the weary dwarf. Here, the wicked witch Hildy Gloom casts a spell on the kingdom, putting all inhabitants into a deep sleep. That is, except for Sleepy and Sir Yipsalot, the pet pooch of Queen Delightful (the ruler of the Jollywood kingdom). Together, Sleepy and Yipsalot manage to sneak into the lair of the Glooms, learning the secret to breaking the spell, and venturing off to do just that before dusk; the spell's deadline. After successfully saving the kingdom, Sleepy is rewarded with a special trophy by the Queen, and deemed a hero by his brothers, whom he used as inspiration to assist himself throughout his journey.

His prize possession is also revealed to be a stuffed bear, as seen in episode "Goldilocks and the 7D." 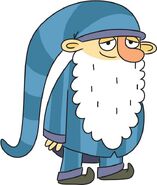