Start a Wiki
This character has been used under the following names below. Navigate using the arrows or by clicking on a name listed on the navigation bar to jump to a specific character name you want to read.
← Previous | Other characters for Stinky the Skunk
Snook • Skunk • Stinky the Skunk

A skunk appeared on Sesame Street as a Grouchy Mother's Day for Mrs. Grouch from her daughter Bunny in Episode 4237. The skunk's odor was also bottled in a spray used by Bob when he dressed as a grouch with Gordon and Chris.

A new skunk puppet debuted in season 43 for the Elmo the Musical segment, "Guacamole the Musical." The puppet later appeared in a "Word of the Day" segment with Troy Polamalu in a season 44 episode (played by Matt Vogel), a season 45 episode and as "Mr. Smellsalot" in The Furchester Hotel episode "Skunks Welcome."

The original puppet is a refurbished version of Stinky the Skunk with Muppet eyes. 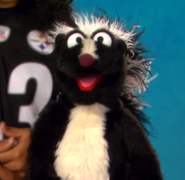 Skunk in 2013.
Add a photo to this gallery
Template:OldNewCharacters
Retrieved from "https://characters.fandom.com/wiki/Skunk_(Sesame_Street)?oldid=83935"
Community content is available under CC-BY-SA unless otherwise noted.