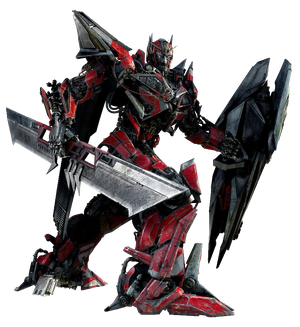 "For Cybertron! For our home! What war destroyed, we can rebuild - but only if we join with the Decepticons!"

Sentinel Prime is the main antagonist of the 2011 film, Transformers: Dark of the Moon.

He was the original Autobot leader before Optimus. After his resurrection, it is revealed that he betrayed the Autobots and made a deal with Megatron; so that he could save Cybertron. Sentinel's ruthless motives, selfishness and cruelty towards both Optimus and Megatron led to his own death.

He was voiced by the late Leonard Nimoy, who is notable for playing Mr. Spock in Star Trek. Nimoy also voiced Galvatron in The Transformers: The Movie, first released in 1986, and also appeared in Transformers 2007 (we hear him as Mr. Spock on Bumblebee's faulty speech generator), and also did the voice of Master Xehanort in the Kingdom Hearts series.

In 1969, Neil Armstrong was secretly assigned to search on the moon and analyzes the crash. Armstrong claimed there were no survivors. Since 1972 no one went to the moon since, and was deemed above classified. Neil Armstrong decided to take the space bridge pillars from the moon, which were then stored in secret by the government which became a law that no one is to know of the alien technology. This law was enforced by the arrogant Director of National Intelligence, Charlotte Mearing before Sentinel was revived.

Following the death of the Fallen, Optimus Prime and Ratchet were helping their human allies protecting Earth, when they encountered a piece of a machine that was originally part of the Ark. They eventually discovered that the Ark crashed landed on the dark side of the moon. The Autobots flew to the dark side of the moon and found the Ark, along with both Sentinel Prime, and five Pillars. With the Autobot Matrix of Leadership, Optimus revived Sentinel Prime. Sentinel took the form of a Rosenbauer Fire Engine. When Sentinel Prime and Optimus Prime were talking to each other alone, Optimus thought that since Sentinel Prime was his leader, Sentinel should have the Autobot Matrix of Leadership and continue leading the Autobots. However, Sentinel said that since he knows nothing about this planet, Optimus should keep the Matrix, teach him about the Planet, and continue being the leader of the Autobots.

The Decepticon sub-group trio, the Dreads (Hatchet, Crowbar and Crankcase) chased after Sentinel Prime. Bumblebee, Dino, Ironhide and Sideswipe guarded Sentinel allowing him to escape wherein Bumblebee & Dino killed Hatchet while Ironhide and Sideswipe kill off Crankcase & Crowbar. After the chase scene ended Sentinel revealed his intention, claiming that the Autobots shall realize that Sentinel was not actually going to help the Autobots win the war, but instead turn against them and explained he made a deal with Megatron. Before anyone could react, he murdered Ironhide, the Autobot closest to him, with his Cosmic Rust gun, and wiped out NEST, with only a few human survivors.

The Invasion and Usurping the Decepticons

With the help of Megatron, Starscream and other Decepticons, they were able to open a space gate so the Decepticons can invade Earth. He decided to spare Optimus, because he was his apprentice once, and he wanted Optimus to watch the fall of the human race. They first took over Chicago and that if anyone tried to infiltrate they would be killed. They also killed most of the people who lived in Chicago (except of Dylan Gould for being an ally and Carly). But while the space bridge pillars where being set up, Sentinel Prime attacked Megatron and reminded him of his place: Sentinel did not work "for" Megatron, Megatron worked "for" Sentinel (indirectly revealing that he actually wanted to taking over Decepticon through their bargains). He then took over full command of the Decepticons. Sentinel stayed out of most of the battle relying on the Decepticon warriors to carry out his plans, including Shockwave, Soundwave, Laserbeak, Barricade and Starscream (all of which would all be killed during the battle).

Other Decepticons were placed around the world with a few of the Pillars. They were going to be used to open a Space Gate and bring Cybertron into the Earth's atmosphere. After the Red Pillar was deactivated by Optimus, (the Pillar that controls all the other pillars) Sentinel Prime fought all the Autobots and N.E.S.T. with little to no effort. While he was fighting the Autobots, Sentinel Prime told any surviving Decepticons and allies of the Decepticons to reactivate the Pillar. With the turning the fight, Sentinel attempted to escape, but Optimus intercepted him and attacked him. Sentinel managed to overpower Optimus and amputate one of his arms, and then prepared to kill him. At the same time, Carly (Sam Witwicky's new girlfriend) tried to convince Megatron to kill Sentinel Prime. She said that if Sentinel did succeed in killing Optimus and transported Cybertron, Megatron would be nothing more than Sentinel's new minion (and indirectly revealing Sentinel's true intentions). Convinced, Megatron rushed in, attacked Sentinel, and severely wounded him, claiming that Earth was his planet to rule. After the space bridge was destroyed, Optimus Prime fought and killed Megatron after refusing his insincere offer of a truce (knowing his true intentions and possibly done so as punishment of his previous actions). With his plans in ruins, the badly maimed and severely weakened Sentinel finally abandoned his pride; he begged Optimus for mercy and attempted to justify his actions, claiming all he ever wanted was their race's survival. But Optimus ignored him and, claiming that Sentinel had "betrayed himself", executed the treacherous Prime with Megatron's fusion shotgun. With Sentinel's death, the deaths of Ironhide and the human soldiers were avenged.

Despite being killed in the previous film, KSI manages to recover parts of Sentinel's body, particularly his head, which are used to create many man-made Transformers, including Galvatron, who is later revealed to be possessed by the still living mind of Megatron.

In spite of his death, Sentinel, Dylan Gould, and the Decepticon's actions are what causes the chance for humanity and Autobot's chance to reconcile over disaster that they caused became slim to none aside the presumably huge damage on the already dying Cybertron. This was proven where Cemetery Wind, which formed to dispatching surviving Decepticons began targeting the unwilling Autobots until only six of them are left (namely Hound, Bumblebee, Optimus Prime, Drift, Crosshairs, and Brains). Sentinel was indirectly responsible for the death of James Savoy's sister, driving him insane as a commander of Cemetery Wind. His crime records in Chicago also supporting Attinger's agenda to convince humanity to wipe out Cybertronian survivors on Earth (except Lockdown whom he made a deal with) and manipulated Joshua Joyce and KSI as his pawns to do so by creating an army of artificial transformers. Fortunately, all of their plans stopped by the reluctant Autobot survivors alongside freed Dinobots and their human allies (particularly Joshua that redeemed himself near the climax and supporting the Autobots and their human allies against Galvatron, Cemetery Wind, and rogue KSI drones).

The damage Sentinel Prime inflicted upon human and Autobot relations continued to carry over into the fifth film, The Last Knight, as the disbanded Cemetery Wind was succeeded by the Transformers Reaction Force.

Even though Sentinel Prime will never get to see it, his dream of Cybertron being restored was granted by Quintessa as she was able to use her technology to build it into a condition where Transformers may inhabit it once again. Because of Cybertron and the Earth are conjoined, the Autobots have no choice but to return to their planet for reconstruction.

Sentinel Prime at first seemed to be a heroic figure and a symbol of freedom to Optimus Prime, but later on it turns out that he is a malevolent and corrupt psychopath who wishes to be an oppressive dictator of everyone else, Cybertronian or human. As an Autobot, Sentinel had taught the value of freedom being everyone's right back to Optimus when the latter was the former's student. However, over the years Sentinel Prime has come to prefer having power and authority much more than enforcing freedom for everyone. Optimus claims that Earth should be the new home for their race as the humans welcomed them, although Sentinel being discriminatory despised the idea of sharing a planet with weaker, smaller organic beings when he could enslave them and he wanted Cybertron restored instead. Sentinel also proved to be greedy for power, as he forced Megatron to abdicate from being leader of the Decepticons and felt humans had no right to object to being used as his slaves.

"What you must realise, my Autobot brothers, is we were never going to win the war. For the sake of our planet's survival, a deal had to be made... with Megatron!"

"I hereby discharge you from duty!"

"So lost you are, Optimus. On Cybertron we were gods, and here they call us machines! Let the humans serve us, or perish! You're lucky I didn't kill you. In time, you'll see."

"I have deigned to work with you that our planet may survive! I will never work FOR you! And you'll be wise to remember the difference."

"Optimus! You forget your place! I bring you Cybertron, your home, and still you choose humanity!"

"Always the bravest of us, but you could never make the hard decisions! Our planet WILL survive!"

"We were gods once! All of us! But here, there can only be one!"

"Optimus... all I ever wanted... was the survival of our race... You must see why I had to betray you.(Optimus: You didn't betray me. You betrayed yourself.) NO, OPTIMUS!"