Scratte is a female saber-toothed squirrel, who debuted in Ice Age: Dawn of the Dinosaurs. She is voiced by Karen Disher.

Scratte is completely the opposite of Scrat. She is cunning, elegant, beautiful and smart. The more pathetic and the more stupid Scrat gets, the more smart and the more cunning Scratte gets.

She appears at the beginning of Ice Age: Dawn of the Dinosaurs, battling over Scrat for the acorn. She appears to be a equally intelligent to Scrat, the only other known saber-toothed squirrel in the series. Scratte does have a love interest in both Scrat and acorns. She also appears to be a flying squirrel with the ability to glide. Scratte is also seen as a love interest for Scrat. She is Scrat's rival and girlfriend.

Through the movie, during Scrat's attempts to retrieve his acorn, Scratte battles with him in order to steal his acorn. Halfway the movie, she was saved by Scrat from falling into a volcano and she falls in love with him, while both forget about the acorn. However, the relationship didn't last much as she gets too bossy and the acorn returns to Scrat. Shortly after breaking up, she remained in the Dinosaur World. Only for a stray piece of ice to fall on Scrat, causing his acorn to fall into the Dinosaur World with Scratte, and blocking a path to the Dinosaur World. Scrat screams in frustration having lost both the acorn and Scratte.

The Battles of Scrat and Scratte

In the Scrat vs. Scratte battles of Ice Age 3, the two take turns to win. In the first battle, Scratte wins. In the second, with the bubbling tarpit, Scrat wins, (but that results him falling into the Dinosaur World). In the third battle, Scratte wins by ripping off Scrat's breast fur. The two also go through the Chasm of Death and breathe in the gas, making them both laugh. The next battle is when they dance the tango. Scratte almost wins but Scrat manages to stop her from gliding away. But Scrat ends up hanging onto an edge looming above some boiling lava. He has Scratte by the tail, trying not to let her go to die. Scrat manges to get back up using Scratte's saber teeth and he picks up the acorn but Scratte lands in his arms and knocks the acorn out of his hands. Then they find love. But near the end, Scratte starts getting bossy and Scrat gets tired of her. He looks out and sees his acorn, so he decides to dump Scratte. The two have another fight and he rock blasts up into the air. When the two of them both grab the acorn on top of the rock. Scratte tries to fool Scrat again by pulling a sweet smile. But Scrat doesn't get fooled. He winks at her and then grabs the acorn. Scratte falls off and goes back down into the Dinosaur World. Scrat ends up back on the ice. Scratte shakes a fist up at him. Scrat dances and jeers but a piece of ice almost lands on him but it lands on his acorn instead. It covers the hole where Scrat came out of so he cannot go down and get it. He screams in frustration losing the acorn and Scratte. But Scratte might have won and got the acorn as her prize. 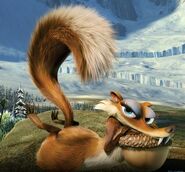 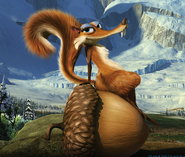 Add a photo to this gallery
Retrieved from "https://characters.fandom.com/wiki/Scratte?oldid=61582"
Community content is available under CC-BY-SA unless otherwise noted.