Scrat is the subtagonist of the Ice Age franchise. He's a secondary character in Ice Age, a supporting character in Ice Age: The Meltdown and Ice Age: Dawn of the Dinosaurs, the pivotal character of Ice Age: Continental Drift and Ice Age: Collision Course and the main protagonist of his own short films and the Disney+ show Scrat Tails. A sabertooth squirrel, he's the comic relief of the films who is always attempting to get his acorn when the film isn't focusing on the main story. 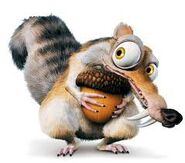