Samurai Jack is the titular main protagonist from the Cartoon Network TV show, of the same name. Jack is a brave samurai. He was flung into the future by Aku, his arch-enemy while he was about the defeat him. He is voiced by Phil LaMarr.

Jack strongly exhibits the characteristics of a stoic hero. He is unfailingly kind and generous, and will always attempt to help those in need, as well as dispatching sage like wisdom to those he believes are in need of guidance. He often ends up sacrificing a chance to return to his own time in order to help someone else.However a running gag in the show is his inability or reluctance to understand the technology of the future, such as in one episode, Jack had attempted to escape Aku's fortress after rescuing two fairy like creatures by driving a hover car, but he fails to operate it competently, claiming he prefers to walk. 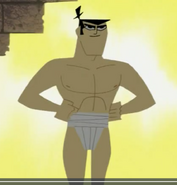