The Royal Dandy is the self-titled subject of a painting on display at Fair City's art museum.

It was first featured in "Lady Redundant Woman Gets the Blues", when the painting was being exhibited for the first time at the art museum, and Becky and Violet 's art class went on a field trip to see it. However, the night before the field trip was scheduled, Lady Redundant Woman broke into the museum and attempted to steal the Royal Dandy, due to a customer at her copy shop stating he couldn't wait to see the art piece, and that he'd seen copies of it, but a copy of anything wasn't as good as the original.

Royal Dandy is very impolite and greedy, and speaks with a distinct British accent. It has been shown he has little to no respect for other people or authority, e.g. stealing all of a lollipop peddler's wares. He refers to Lady Redundant woman as his "mum", to her great annoyance.

He thinks of LRW as his "mum". He was friends with a horse (also painted), but the horse didn't like him and ran off.

The copy of the Royal Dandy is voiced by Sergio Cilli, best known as a contributor to the Current TV series InfoMania. 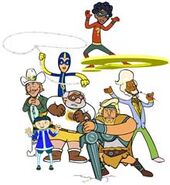 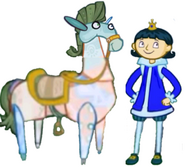