Robyn Starling is the tritagonist of Tom and Jerry: The Movie. She is a cute and tomboyishly beautiful lost young girl who befriended Tom and Jerry who are trying to help her find her father (who is in Tibet) while avoiding their nemesises Aunt Pristine Figg, Lickboot, Ferdinand, and Dr. Applecheek. Her mother died during Robyn's infancy. She is voiced by Andi McAffee, who had won the Young Artist Award for Best Youth Actress in a Voice-Over Role after this (the only nomination and win for the film). 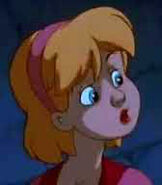 Retrieved from "https://characters.fandom.com/wiki/Robyn_Starling?oldid=104509"
Community content is available under CC-BY-SA unless otherwise noted.