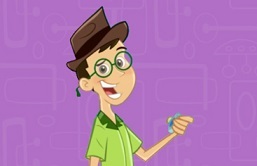 Reed is a major character in the children's television series Fresh Beat Band of Spies airing on Nickelodeon.

Reed is the gadget guy of the spy team. He provides the Fresh Beats with useful inventions that help them catch criminals and solve mysteries. Reed often appears out of nowhere, causing the Fresh Beats to jump in surprise and yell, "Reed!" Though he does not take part in much of the action, Reed is a very important member of the team and a loyal friend to the Fresh Beats. Reed wears a pair of round green glasses and a brown fedora on his head.

Reed in the pool

Reed in a basket of socks

Reed with his backpack and parachute

Reed at the spy base

Reed with Twist at the parade

Reed in his cowboy outfit

Reed with Bo Monkey at the arcade

Reed inside a computer

Reed talking to Kiki and Marina

Reed at the museum
Add a photo to this gallery

Retrieved from "https://characters.fandom.com/wiki/Reed?oldid=65114"
Community content is available under CC-BY-SA unless otherwise noted.