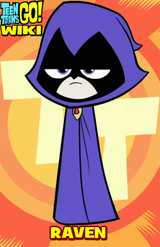 Raven is a character on the newer animated interpretation and is one of the two secondary protagonists (alongside Cyborg) of Teen Titans reboot, Teen Titans Go!. Raven is a half-human, half-demon sorceress living on Earth, lending a hand to the super-hero team The Teen Titans. Raven is the token smart member of the team even with the genius Robin and super-genius Cyborg on the team. She is also in love with her team-mate, Beast Boy, who acts as her cheerful and fun-loving foil.

Where Robin uses his smarts for strategy and Cyborg uses his smarts for inventing new gadgets, Raven tends to apply her intellect to basic problem-solving and ancient lore and tries to be the most sophisticated of her team. Raven has a variety of dark powers tied to her demon-half. 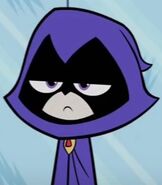 Add a photo to this gallery
Retrieved from "https://characters.fandom.com/wiki/Raven_(Teen_Titans_Go!)?oldid=161390"
Community content is available under CC-BY-SA unless otherwise noted.