Raphael is one of the lead characters in Teenage Mutant Ninja Turtles.

After saving Earth and being back home, Raph never mentions Mona Lisa again however she is mentioned by Donnie and bringing up the ordeal on that day, making Raph snapped at him and angrily tells everyone to drop the whole thing. Mona Lisa has been appearing in his hallucinations of his phobia about bugs but never told anyone about Mona appearing in them. During his hallucinations with Mona Lisa he is seen happy to see her, showing he really misses her.

Raphael has been shown to hope one day that he would love to have someone to with to fight side by side.

Raphael is the only one of his three brothers not to have a crush on any girl, probably because he does not want his heart broken due to that fact that he a giant talking turtle and no human girl is not gonna want to have relationship with him. Thus he does not care for love and does not want to be a part of a love triangle or hear Master Splinter's love stories or anybody else's problems. However as of season three episode 'Tale of the Yokai', for the first time ever Raphael begins to understand Love, while his brothers tried to convince Tang Shen to be with Splinter and not Shredder, Raphael tells Tang Shen to follow her heart instead of forcing her to pick.

Raphael is happy to be with his family, friends and Spike at the time and talks to them however deep down he's really lonely and claims that nobody truly understood him.

When not angry, Raphael is shown his romantic side when ever he sees Mona Lisa.

Raphael's temper became a problem since episode three and it has been growing more intense in future episodes and seasons. Master Splinter and those closest to Raphael had tried many times to help him keep down his anger but nothing worked.

Many characters from outside of his home have noticed his anger, mostly Tiger Claw or Tiger's Eye and trying to tell him that he needs to control his anger and this was in season three. 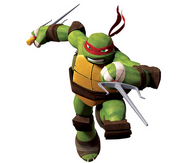